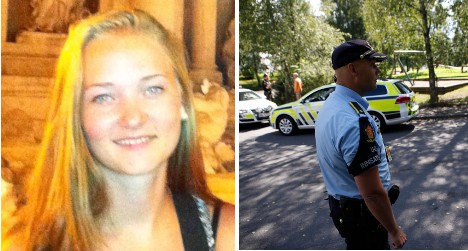 Volunteers continued on Sunday night to help in the search for the Norwegian teen who was reported missing at 12.30am on Sunday. The search has been intensified further on Monday morning.

"We want to deploy forensic detection dogs which are going to follow the same route as the missing person took on Saturday night,"  said Oddleif Sveinungsen to the NTB news agency.

"We are also going to deploy a helicopter to span the same extended search area and along the beach. Crews from the Norwegian search and rescue dog association will search the parking area in  Østmarka," he said.

Divers were deployed in the water off Østensjøvannet on Sunday evening with the search called off at 10.30pm without result.

Sveinungsen said that further dives would be undertaken if new information makes it relevant.

Police reported that they have received more than 100 tips from the public in relation to the disappearance and have conducted a number of witness interviews, surveys and forensic investigations.

Sigrid Giskegjerdet Schjetne was reported missing by her parents at 12.30am on Sunday, after she failed to arrive home after having been at a friend's house two kilometres away.

Police found the girl's shoes, mobile telephone and a sock near the teenager's home.

She is reported to have had contact with friends via sms while walking home and none reported any behaviour which was out of the ordinary.

Local resident Anne-Mette Jørgensen Saethre has reported hearing a scream at around 12.30am near a children's daycare centre only 300 metres from the teenager's home.

"We heard a long, frenetic and scared scream… My daughter said it sounded like a painful cry," she told NTB.

The teenager was wearing jeans shorts, blue jumper and grey singlet when she disappeared. She is 16-years-old, 170 centimetres tall and has light brown hair and blue eyes.

Police have called for anyone who was in the vicinity of Skøyenåsen between 11.30pm and 1am to get in contact by calling 02800.

The girl's family have let it be known that anyone willing to help in the search can meet at 10am on Monday at Østensjø school.

In December 2015, the woman, accompanied by her four-year-old child, attempted to travel to Syria via Greece and Turkey in order to join IS, the authorities allege.

Her intended destination was Raqqa, which was at the time an IS stronghold in Syria.

The woman was prevented from continuing her journey by the Greek authorities and was arrested at Zurich airport on her return to Switzerland in January 2016.

The Swiss attorney general's office filed an indictment against the Swiss national for offences under the federal law that bans terror groups including Isis.

According to the indictment, the woman radicalized herself through internet propaganda after converting to Islam in 2009.

It says the Swiss national believed it was the duty of all Muslims to support IS.

She said she rejected western values.

This is only the second case concerning a so-called ‘jihadi tourist' to go before Switzerland's federal criminal court.

The first prosecution of its kind took place in 2016, when a 26-year-old man was found guilty of attempting to travel to join Isis and given an 18-month suspended jail sentence.

Islamic State has been banned in Switzerland since 2014.