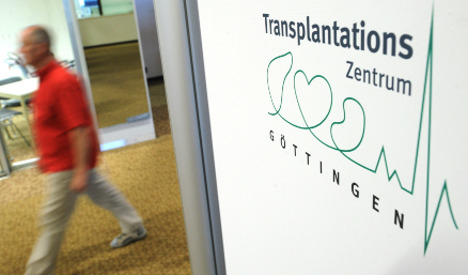 The Göttingen public prosecutor said on Friday it planned to investigate 23 possible cases of negligent manslaughter, where people may have died as a result of being pushed down the organ waiting list.

And it now seems information that goings-on at the hospital’s transplantation unit were not as they should be had surfaced as far back as 1995. Doctors then expressed doubts about the large number of transplantation operations carried out there, the Frankfurter Allgemeine Zeitung reported on Monday.

It would seem that for many years, around half of all organ recipients were Italian – as was the suspected doctor. Nearly all of these patients were being treated at the Bologna University Hospital – where the doctor in question did his training.

Laboratory workers repeatedly ordered checks due to the high levels on some medical records – and while new figures were entered into the patients’ own records, the data sent to the Eurotransplant foundation which organises waiting lists, was not corrected, the paper said.

The German Medical Association’s investigative committee has found 119 suspect cases since 1999, the paper said. It was prompted to look into the matter by an anonymous phone call to the German coordination office for organ donation – the caller asked if one could buy organs at the Göttingen hospital.

President of the association Frank Ulrich Montgomery said the scandal had seriously damaged trust in the transplantation organisations, which would be very difficult to regain. He said doctors found to have been responsible for such behaviour should face harsh consequences – including losing their licenses to practice.