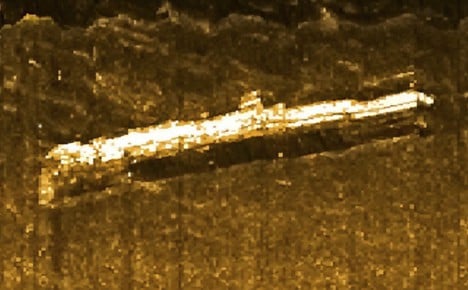 Sonar image of U-550 discovered in the Atlantic on July 23. Photo: DPA

The sonar images, depicting what searchers now say appears to be a German U-boat about 18 metres deep in the Churchill River in Labrador, were taken in 2010 during a search for three people who had drowned.

After reviewing the photos recently, the researchers say they can make out the deck of the ship, cables typically attached to the top of U-boats, a gun mount and snorkels used to bring in air without surfacing.

“We were looking for something completely different, not a submarine, not a U-boat – I mean, no one would ever believe that was possible,” searcher Brian Corbin told public broadcaster CBC.

“We're pretty sure it is [a U-boat], and we've filed this with receiverships and wrecks, and I think they're confirming that it is possibly a U-boat.”

Corbin said he hopes to return to the river to take a closer look with a robotic submersible while Canadian authorities try to authenticate the discovery.

German U-boats were known to roam off Canada's east coast during the Second World War, destroying a passenger ferry between Newfoundland and Cape Breton Island and 23 Allied cargo vessels and warships in the Saint Lawrence River.

In the 1980s, remnants of a World War II era German weather station were also discovered in Labrador.

The German government told Canadian media that about a dozen U-boats remained unaccounted for.

But an official at the German embassy in Ottawa added it would be “sensational and unusual” for one to have ended up so far inland, more than 100 kilometres from the ocean.

The find comes less than a week after a privately funded search group located a Nazi U-550 U-boat lying on the bottom of the Atlantic Ocean 113 kilometres Nantucket in Massachusetts, USA.

Historians say the U-boat torpedoed and sank the large US tanker Pan Pennsylvania before being attacked by convoy escort ships on 16 April 1944.