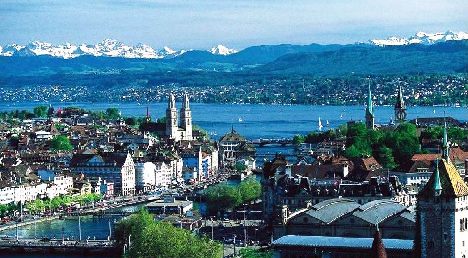 The result is empty floor space in many downtown buildings, according to real estate experts.

Although commercial rents remain costly in the centre of Switzerland’s biggest city, the situation is rapidly evolving.

In the next two to three years “property owners will most likely need to lower their rents by 10 to 20 percent if they want to find a buyer for their rooms,” Daniel Stocker of Colliers International, the real estate company, told the Tages Anzeiger newspaper.

One reason for the drop in demand is decisions by large employers such as the UBS bank to transfer jobs to locations like Altstetten, Oerlikon or Opfikon on the city’s periphery.

Credit Suisse in March moved more than 2,000 employees to its Uetlihof building southwest of the city centre, while insurer Allianz is transferring 1,200 workers to a site in suburban Wallisellen.

The University of Zurich and the city’s college of education are both shifting operations out of the central business district.

Experts say older buildings in the centre no longer meet the needs of commercial tenants because they do not allow for “open plan” offices and are energy inefficient, besides being difficult to reach by car.

UBS pays less than half for its space per square metre in Altstetten than in the city centre, Tages Anzeiger reports.

While businesses appear keen to abandon the core, demand for residential accommodation there remains high.

However, a study by consultants Wüest & Partner concludes that converting office space into apartments is costly and difficult.

Still, some foresee a demand, even with apartment rents estimated at up to 5,000 or 6,000 francs a month for 100 square metres of floor space.

Apartment conversions would bring full circle a process that saw hundreds of Zurich’s downtown homes converted into offices in the late 1970s and early 1980s.