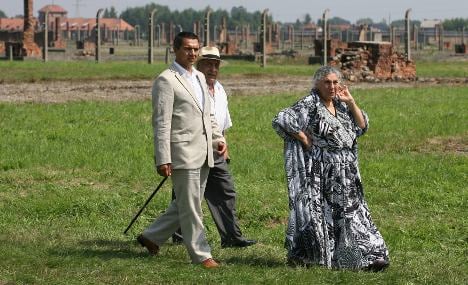 Her dead husband, named only as Anton B., was granted a victim’s pension in 1957, and he drew it until he died in 2009 with no problem. But when his widow applied to have the €600 a month paid to her after his death, authorities said the 1957 doctor’s report was wrong and prevented the payment.

The case has outraged German Sinti and Roma groups – up to 500,000 of whom were murdered by the Nazis during the holocaust, wrote the taz newspaper on Tuesday.

“This is, 67 years after the Holocaust, an unbelievable and unacceptable turn of events,” wrote Romani Rose, head of the Central Council of German Sinti and Roma in a letter to North Rhine-Westphalia State Premier Hannelore Kraft.

“We will not permit this degradation of Auschwitz victims.”

Anton B. was 19 years old when in March 1943, head of the SS Heinrich Himmler gave the order to round up all Sinti and Roma people still on German-occupied soil and deport them to the infamous Auschwitz-Birkenau death camp in Poland.

All of Anton’s ten siblings were among the 17,000 Sinti and Roma who died there. But a year later, Anton himself was deemed still fit for work by the SS doctors and in April 1944 was moved to Buchenwald concentration camp, where he was forced to work in a mine and later, to make V2 rockets, wrote the paper.

Twelve years later in 1957, doctors examining Anton confirmed that the two years he had spent in Nazi camps had directly caused permanent damage to his both his heart and nervous system. On the basis of the results of this medical exam, Anton was granted a compensatory so-called victim’s pension from the state.

Eva met Anton in 1975 when he was 51 and she was 25. Despite the age gap, they fell in love and were married soon after, wrote the paper.

Anton died in 2009 aged 85, and Eva, then 59, applied to receive a widow’s pension entitling her to €600 a month. But her application was denied by Düsseldorf district government, who said they had studied the doctor’s notes from the 1950s and had decided that it had been a mistake to say Anton B.’s heart condition was a direct result of his internment in the concentration camp, wrote the paper.

Complicated rules surrounding widows pension for widows of Nazi victims state that the victim has to have suffered from an ailment not only directly resulting from persecution, but which also ultimately killed them. Usually, wrote the paper, cases are rejected because victims don’t die of the same ailment, but strangely, in this case, it was the initial diagnosis which was called into question.

“It’s understandable that the decision is hard to accept for Mr B.’s widow,” a spokesman for the North Rhine-Westphalia interior ministry told the paper. But there was no “scope for discretion.”

After three years of fighting the local authorities, Eva, now 62, is due to take her case before the Düsseldorf District Court on August 7th. A final ruling is expected in September.