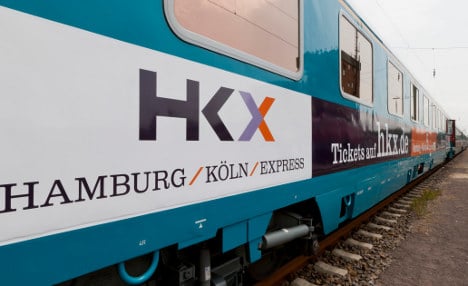 “I expect that we will be working in profit in the coming year already,” said Henry Posner, head of the American investment firm Railroad Development Corporation, which has funded the Hamburg-Cologne Express (HKX).

The service set off from Hamburg at 6:35 on Monday morning, and arrived at 11:03am in Cologne – six minutes behind schedule.

The wagons were Rheingold models which date back to the 1970s, but fully cleaned for the start of their second maiden journey.

They were pretty much full on the return journey to Hamburg on this the first day of the new cut-price service.

Manager Eva Kreienkamp did not mention the problems with Deutsche Bahn over making the rails available which had delayed the service by two years. “The DB Network is currently cooperating very well,” she said.

The new service costs €20 from Cologne to Hamburg, €40 for the same trip in the other direction – as long as tickets are booked online – but €60 for either stretch when bought from the conductor on the train.

Deutsche Bahn’s regular price is €83 for the trip with its Intercity service, and €92 with the Intercity Express, although these prices are halved if the traveller has a Bahncard 50.

The Hamburg-Cologne connection will not be the last challenge to Deutsche Bahn’s monopoly – there are plans for another company to take it on along the Berlin-Cologne route by the end of this year.