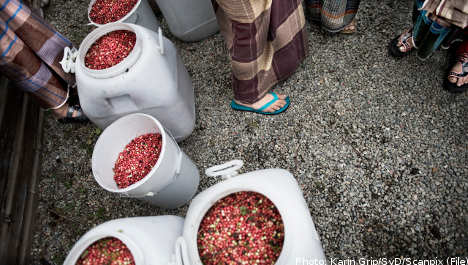 “The Asian pickers are suddenly more expensive and low-wage European pickers have become interesting to employers again. It is hardly a surprise that this is happening,” said Tord Ingesson, expert on migration policy at the Swedish Trade Union Confederation (Landsorganisationen – LO) to news agency TT.

The new guidelines stipulated that berry pickers could only be hired by a foreign company with an affiliate in Sweden, which would be held responsible for following the work conditions in the contracts.

Further, the company had to be able to prove that it could pay the berry pickers’ salaries even if the harvest was poor and it was required to show proof that it had informed the pickers both of what kind of job they would be carrying out and of the work conditions involved.

However, as EU citizens don’t need a work permit the new guidelines don’t apply to them.

According to Ingesson this has meant that the problem has shifted from Asian berry pickers being mistreated to EU citizens.

Monday saw the remand hearing in Uppsala of a Bulgarian resident under suspicion of people-smuggling berry pickers to Sweden.

The 43-year-old man was arrested last week after allegedly luring other Bulgarians into coming to Sweden with the promises of a salary, a home, and a job.

However, instead the workers ended up in a makeshift campsite in Mehedeby, south of Gävle, with no running water or bathroom facilities.

The camp was initially set up with permission from the land owner and is home to several hundred berry pickers, most of whom are from Bulgaria.

Lately, however, tensions have been escalating and the camp was targeted by what was believed to be a stone-throwing attack carried out by local youths.

After a few dramatic weeks, the Bulgarian ambassador is scheduled to meet representatives for the Söderhamn and Tierp municipalities on Tuesday to discuss the problems with the berry picker camps, according to local paper Söderhamns-Kuriren.

The more than one hundred berry pickers resident in the camp now risk eviction but so far the planned action has been halted, pending investigation from the Swedish Enforcement Authority (Kronofogdemyndigheten).

The Stora Enso forest company applied for the berry pickers to be removed as early as last week, but they are also waiting to see what will happen next.

“We are planning to have a meeting at the Tierp municipality tomorrow with representatives from the local authority as well as the police. The aim is to discuss how to move forward from here. There are so many involved now and one mostly feels sorry for these people. For their own good it is vital that we deal with this swiftly,” said Lars Berglund of Stora Enso to TT.

Every year, the Christmas goat (Gävlebocken) in the Slottstorget square in Gävle, central Sweden, attracts a media storm with locals dreaming up new ways to protect the arson-prone 13-metre-high creation.

Despite their efforts, including in some years spraying the goat in anti-flammable liquid, the goat usually goes up in flames long before Swedes have opened their Christmas presents.

Last year, the goat surprisingly made it to Boxing Day intact, to the delight of organisers, who were reported to have put a “secret” plan into effect to protect it.

In 2016 it was less fortunate, going down in flames mere hours after its inauguration.

“Many people are invested” in the straw goat in Gävle, Maria Wallberg of the town’s municipality told TT.

The central Swedish town is naturally proud of its luckless Christmas decoration, despite the fact it has burned town 29 times during its 50-year history.

Thousands of people are expect to attend the unveiling of the goat on Sunday, with the ceremony to be presented by Swedish comedian Clara Henry.

I’m baaack! ?? Well, almost. I just need to get my head on straight… #gävlebocken #theresnoplacelikehome pic.twitter.com/stBbWzkV60

“It means an incredible amount that the city has such a strong symbol which is known all over the world,” Wallberg said.

Security around the giant goat is expected to be high, both during its inauguration day and throughout December. Security guards and cameras will both be deployed to keep an eye on it behind its fencing, while a taxi rank has been moved to the square to increase the presence of people in the area.

“For security reasons, we can’t go into too much detail,” Wallberg said of any further precautions.

Historical precedent is against Gävlebocken. In its first year, 1966, it burned down on New Year’s Eve and it has only made it through the entire month on 15 occasions. It has been burned, stolen and vandalised. In 1976, someone drove a stock car into it. “An attack early in the season would mean cancellations at hotels and restaurants. So it is incredibly important for Gävle, Gävle’s businesses and for everyone who wants to visit the goat that it is still standing at New Year,” Wallberg said.