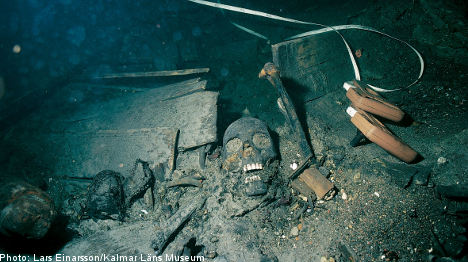 Archive photo from the Kronan collection at Kalmar Museum

“We have found the remains of two crew members. The remains were laying in very favourable conditions and in one of the cranium there is some remains of brain tissue,” said Lars Einarsson at the Kalmar County museum to The Local.

The royal ship Kronan sank at noon on June 1st 1676 just prior to hostilities beginning between the Swedish and the allied Danish-Dutch fleet, known as the “The Battle of Southern Öland”.

Only some 40 men survived the sinking of the ship, with the other 800 or so crew members perishing in the Baltic Sea waters.

More than 20,000 items have so far been recovered from the vessel since it was located in 1980 and while cranial remains of crew members have been found before, the recent find offered up some surprises.

“It was not expected in this area. The ship was going into battle and so the crew would have been at battle stations,” Einarsson told The Local.

The well-preserved skull parts were found on the rope deck, located second to bottom of the ship and according to Einarsson the location had formed an air-free pocket which had helped to preserve the remains.

He added that the mystery could only be solved by careful study of the material surrounding the find and this will now be carried out by researchers at Stockholm University.