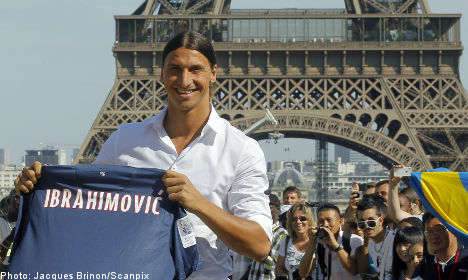 He has been hired on a reported annual net salary of about €14 million ($17 million) — the most ever paid to a player in France.

But with France struggling to avoid recession and unemployment on the rise, Socialist politicians have reacted angrily to the figure, denouncing it as a sign of rampant excess.

Even one former sports minister from the right-wing UMP party has denounced the salary.

France’s new Socialist government is insisting that Ibrahimovic will have no choice but to pay the 75-percent tax rate it intends to impose on annual salaries in excess of one million euros from next year.

“These numbers are not impressive, they are indecent,” Budget Minister Jerome Cahuzac told Europe 1 radio Thursday when asked about Ibrahimovic’s salary.

“They are indecent at a time when everyone in the entire world is making efforts and knows the terrible consequences of a crisis,” he said.

Vallaud-Belkacem said there was no way Ibrahimovic would “escape” from paying the 75-percent tax rate. Some ministers even rejoiced that his salary would bring so much revenue to state coffers.

“I am delighted that he will be paying taxes in France,” said Benoit Hamon, a junior economy minister. “This is a demonstration that this tax was not an argument to prevent great players from coming to play in France.”

Although he didn’t criticize Ibrahimovic’s salary itself, he pointed to the relatively modest salaries at French league champions Montpellier as an example.

“There are teams that manage to win… without necessarily having very significant salaries,” Hollande said during a visit to France’s national sport institute.

“As we have already said, we respect French laws. We do it today and we will do it tomorrow. Ibrahimovic’s signing is very positive for PSG but also for French football,” he said.

Tax experts said that to guarantee Ibrahimovic a €14-million net salary the club will have to set aside enormous amounts.

“If you want the part taxed at 75 percent a year paid entirely to the player, the club will have to pay four times that much,” said French tax lawyer Frederic Naim.

Experts said Ibrahimovic would be required to take French residency and pay French taxes, though he might benefit from a deduction for temporary residency allowing him to cut his taxable income in half.

Hollande defeated right-wing incumbent Nicolas Sarkozy in a presidential vote in May with vows to tackle France’s economic problems by boosting taxes on the wealthy and spending to promote growth.

The 75-percent tax rate has been derided by the right, who say it will lead to an exodus of top earners from France while doing little to address the country’s fiscal problems.