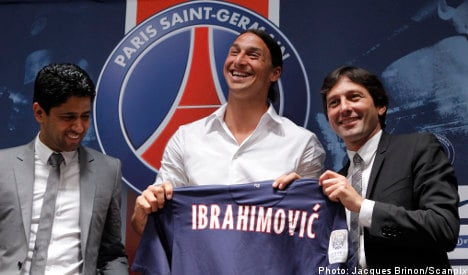 Ibrahimovic joins the big-spending Ligue 1 side on a three-year contract from AC Milan for a reported fee of around €20 million ($24.5 million), and stands to earn a salary worth €14 million a year.

“I think they’ve made something that looked impossible, possible. I’m very happy to be sitting here. After lots of talks, I’m finally a PSG player. It’s a big step in my career, another dream come true.

“I think this is a very interesting project and I had no doubts. In my mind I was very clear, and I knew what I wanted.

He added: “I’m joining a dream team. They’ll do everything to win and I want to be part of it. They already have some great players.

“And they’ve bought the best defender in the world, Thiago Silva. As long as I have him behind me, I don’t need to look back.

“They’re bringing together the very best. Who wouldn’t want to be here?”

The 30-year-old follows in the footsteps of former Milan colleague Thiago Silva, who completed a €42 million move to Paris last week that made the Brazil centre-back the most expensive player in French football history.

The departures of Thiago Silva and Ibrahimovic have robbed Milan of their two brightest stars, but Ibrahimovic said he had not been encouraged to leave the cash-strapped San Siro club, with whom he won the 2011 Italian title.

“No-one at Milan influenced me,” he said. “It was my choice and my choice alone.”

He added: “I was very happy to be at Milan. They gave me my smile back (after a disappointing season at Barcelona in 2009-10).

“It’s a club that will stay in my heart. They helped me and my family, and I don’t want to put a shadow over my time there.

“They made it easy for me to come to PSG so I thank them and I wish them all the best.”

Having seen their side pipped to the Ligue 1 title by Montpellier last season, PSG’s owners, Qatar Sports Investments (QSI), have doubled their efforts to turn the team into one of Europe’s leading sides.

Ibrahimovic is the fourth player to have joined the club from Serie A this summer, after Thiago Silva, Argentine forward Ezequiel Lavezzi, and 19-year-old midfielder Marco Verratti, who was also presented to the press on Wednesday.

The signings of Ibrahimovic and Verratti take PSG’s spending on transfers alone to around €100 million this summer, and over €200 million since QSI bought the club a year ago.

Leonardo said that the acquisition of Ibrahimovic represented the end of the club’s summer spending.

“The market is closed for new arrivals,” he said. “With Zlatan we’ve finished in the transfer window this year.”

Around 100 journalists from around the world attended the press conference at which Ibrahimovic was presented, with a significant crowd of supporters waiting outside the stadium for a glimpse of their new star.

Leonardo announced on Tuesday evening that the club had agreed to sign the Sweden captain, who subsequently underwent a medical examination at a Paris hospital on Wednesday morning.

Formerly of Malmo, Ajax, Juventus, Inter Milan, Barcelona and Milan, Ibrahimovic has won league titles in three different countries and finished as the top scorer in Serie A last season.