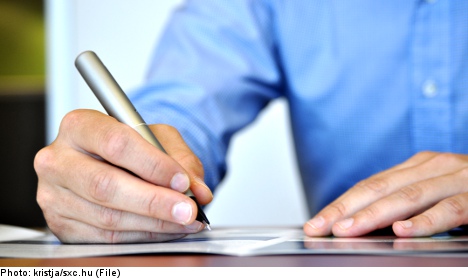 The findings come from a study carried out by the TNS/Sifo polling firm in coordination with Linköping University which also revealed that 15 percent of respondents already had experience working outside of Sweden.

“It’s very important that Sweden position itself as an attractive country to work and study in,” Rodrigo Garay, founder of Working for Change, said in a statement.

“But we also have to be better at taking advantage of the competence that already exists in Sweden.”

Garay’s Working for Change, which is organizing a large recruitment fair scheduled to take place in Stockholm in December 2012, wants to highlight ways that Swedish companies and organizations can manage the demographic challenges and opportunities that come with increased migration and cultural diversity in Sweden.

The study, which is based on responses from 3,200 recent graduates from Linköping University, has prompted calls for action to ensure that Sweden doesn’t lose talented young workers to attractive employment opportunities in other countries.

“Swedish universities need to be better at making contacts with the business community and helping students – both Swedish and international – get jobs,” said Linköping University partnership director Göran Felldin in a statement.

“There’s a risk that instead of attracting the international talent we need to Sweden, we’re going to lose it,” he said.

Despite worries that Sweden may lose the battle for talent, economics professor Jan Ekberg from Linnaeus University pointed out there are benefits to having Swedish graduates gain experience abroad.

“Many have gained foreign experience that can be good for the Swedish economy,” he told SR.

PARTNER CONTENT
How an original application can get you into a top university
Url copied to clipboard!