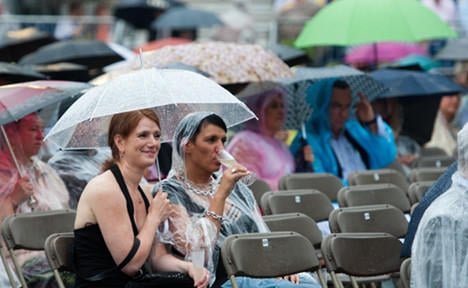 Heading into Saturday evening, the north should be relieved of the heavy rain and storms that kept many indoors in the morning. A chance of storms remained in the south but temperatures should be comfortable at around 20 degrees Celsuis.

Heavy rainfall, thunder and lighting are predicted for the west on Saturday night, while in the eastern states clouds should part, giving way to a cool but dry summer’s evening.

Night time lows of between 13 and seven degrees are expected, the DWD said, and in hilly areas as well as along the coast, people should prepare themselves for gale force winds.

On Sunday the weather is expected to be changeable again as heavy cloud cover should move across the country, bringing with it the occasional heavy downfall. Temperatures are set to hover at between 15 and 21 degrees.

Sunday night is set to be somewhat nicer though, as clouds should lift giving way to a clear, dry evening except along the North and Baltic coastlines where showers will fall through the night.

Temperatures will again be relatively cool during the night said the DWD, who predicted lows between seven and 13 degrees Celsius.

By Monday, the county will be divided with the north facing a thick blanket of cloud while people the south could be fortunate enough to see blue skies, sunshine and temperatures into the mid-twenties.

During the night, very thick clouds will cover the whole of the north bringing a high chance of rain, the DWD said. Central Germany will also be covered by clouds, but to a lesser extent. In the south the clear skies from the day will continue, making for a dry and starry night.

Tuesday will see showers in the north and central areas, while the south will see longer sunny periods. Temperatures will reach up to between 20 and 25 degrees Celsius in the north, a touch higher at 26 degrees in the south, but lower at around 20 degrees in mountainous areas.