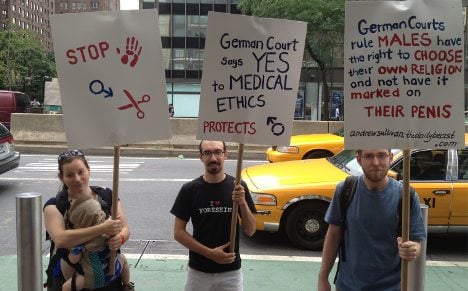 “It is absolutely clear to the federal government that we want Jewish, we want Muslim religious life in Germany. Circumcisions carried out in a responsible way must not be subject to prosecution in this country,” he said.

He said that aides from Merkel’s office would now discuss with the relevant government ministries ways to put the “ancient rite” on firm legal footing.

“It is clear this cannot be put on the back burner. Freedom to practise religion is a cherished legal principle,” he said.

A spokeswoman for the justice ministry said that there were three options for new draft laws to protect circumcisions on religious grounds that were under “intensive” review.

The leader of Merkel’s conservative parliamentary group, Volker Kauder, called for a cross-party resolution to this effect to be passed in the Bundestag during a session next Thursday, in an interview to be published Saturday in the daily Die Welt.

It concerned a case brought against a doctor who had circumcised a four-year-old Muslim boy in line with his parents’ wishes.

When, a few days after the operation, the boy suffered heavy bleeding, prosecutors charged the doctor.

The court later acquitted the doctor himself of causing harm but judged that “the right of a child to keep his physical integrity trumps the rights of parents” to observe their religion, potentially setting a legal precedent.

German diplomats admit that the ruling has proved “disastrous” to the country’s image abroad, particularly in light of its Nazi past, following uproar from officials in Israel as well as Muslim countries.

European Muslim and Jewish groups banded together this week to criticise the ruling and called on German MPs to pass legislation protecting the practice.

Pinchas Goldschmidt, president of the Conference of European Rabbis, who organised an “emergency” meeting in Berlin of around 40 Orthodox Jewish clerics Thursday on the judgement, called it “perhaps one of the gravest attacks on Jewish life in the post-Holocaust world.”

Goldschmidt, also head of the rabbinical court of the former Soviet states, said if other judges went along with the Cologne ruling “it would mean that a large part of the (Jewish) community does not have a future in Germany.”

Opposition leaders said Friday they would back a new law, with the head of the Social Democrats Sigmar Gabriel calling for “legal clarity” on the matter and Renate Künast of the Greens welcoming the fact that a “storm of outrage” had “finally led the government to see reason”.

Legal experts, however, note that drafting legislation could prove tricky in balancing religious freedom on the one hand against “physical integrity” on the other.

Justice Minister Sabine Leutheusser-Schnarrenberger noted this week that even with a new law, a federal court would likely have the last word on the issue.

The Cologne judges’ ruling is final and cannot be appealed to the Federal Constitutional Court.

But although it only applied to the case at hand, as long as no other judgement contradicts it and no new law is passed, attorneys say that doctors and parents run the risk of prosecution under the status quo.