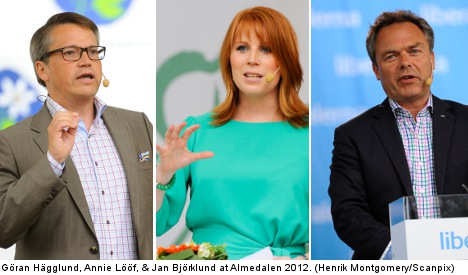 At first, Jan Björklund, the Liberal Party leader and Minister for Education, was forced to use his platform at Almedalen for damage control after the party’s youth organization used an opinion article in Expressen to openly call for him to be replaced as party leader by current Minister for Democracy Birgitta Ohlsson.

It didn’t help either that his economic policy spokesperson, Carl B. Hamilton, suggested that the parties in the centre-right governing Alliance should join forces and become a single party.

The idea of creating one non-socialist party has been around since the 1960s but has never been taken seriously.

So when he entered the stage at seven in the evening it was as a party leader who was under pressure. Björklund, who holds the rank of major in the Swedish army, had seen his party lose the political initiative due to party infighting and his speech was an attempt to fight back.

He must have felt a bit like the Spartan king Leonidas at Thermopylae as he was faced with hoards of enemies.

Unlike Prime Minister Fredrik Reinfeldt, however, Björklund outlined a strong defence of what the government has achieved. He defended the party line that immigrants “must learn Swedish”.

He also talked about globalization and jobs.

“Others may be unclear but I won’t be,” was his opening line.

He then declared that Sweden’s true rivals were in Asia and if the country did not create more, ultimately Sweden would become “a museum for rich Chinese people”.

The Liberals plan to fight this development by liberalizing the Swedish job market, introducing compulsory employment insurance, and accepting wage differences in the public sector.

This was the climax of the speech and one quickly realized Björklund wants to place his party on the liberal right – a strategy that might take votes from the Moderates. But it will also be interesting to see if Björklund is the party leader at the next election.

Sweden’s agrarian party, the Centre Party, has suffered an electoral and ideological crisis since the early 1980s. It has tried to be a middle of the road party and supported the Social Democratic budget cuts in the 1990s.

Overall, it was considered to be a sort of non-socialist environmentally friendly but slightly left-wing party, until Maud Olofsson became party leader in 2001.

She took the initiative to create the four-party Alliance and was awarded with a post as Minister for Enterprise and Commerce by Fredrik Reinfeldt in 2006.

The Centre Party had gone into the election as a genuinely non-socialist party advocating tax cuts and privatizations, and Olofsson had attracted votes from those who use to vote for the Moderates.

Around the same time the party sold off its newspaper group, making it the world’s richest political party. But now the party is in crisis, Olofsson is out, and the Centre Party’s future rests on the shoulders of the young, but talented, 28-year-old Annie Lööf.

Lööf, who assumed the position in September 2011 and also took over Olofsson’s ministerial portfolio, has taken up the challenge of solving her party’s crisis.

The day before her speech at Almedalen on Friday, the party had arranged a seminar about the need for ideas in politics, inviting a panel of external speakers, many of them not sympathetic to the Centre Party’s policies.

The party received a fair amount of criticism for failing to formulate a new narrative that would attract the voters. Afterwards a local Centre Party staffer expressed his worries.

“I really hope we stay in the Riksdag,” he said, referencing a number of recent polls which put support for the party below the four percent threshold for a place in parliament.

Lööf didn’t shy away from the party’s problems in her first speech at Almedalen as party leader. She tried to present a narrative of where Sweden is going and acknowledged there was a crisis in the party to which she offered a solution.

Her message was that we “need to reconnect” in order to strengthen the government. She presented the concept of the Alliance 2.0, which was met with some cheers from supporters. She then offered some more concrete policy proposals such as introducing the German concept of apprenticeship places and the Danish flex-security system.

Lööf has suffered a lot of criticism because of her age and her speaking style, being accused of speaking in clichés. But here in Almedalen, a lot of supporters turned up to hear what she has to say.

It did not feel like the Centre Party would lose its place the Riksdag if it had been an election today. Of course, it could also be that Lööf’s supporters simply wanted to give “a show of unity” in front of the cameras.

Later the impression among those who had listened was that she delivered a good speech but there was a lot more to be done. While the Center Party and Lööf may have a long way to go to end the party’s current crisis, at least they have the cash to do it.

Few political parties receive as much as criticism as the Christian Democrats, probably because Sweden is so secular that many people find it somewhat offensive that there is a political party calling itself “Christian”.

For over thirty years the party was led by Alf Svensson, who stepped down in 2004, is regarded today as a living national treasure.

And his successor, Hägglund quickly established himself as a funny, warm and witty party leader, having famously joked at an Almedalen panel about adoption prior to his appointment as leader, “I cannot emphasize how important it is for children to choose the right parents.”

But his ride as party leader hasn’t been easy.

While the party includes social conservative and religious fundamentalists, Hägglund wanted the party to be the conscience of Sweden’s centre-right parties.

As health and welfare minister, he talked about ethics, children, families and the rights of old people and oversaw the privatization of the pharmacy monopoly.

But a large faction within the party thought he wasn’t far enough to the right, wanting to profile the party as more anti-government. The party’s youth wing also grew tired of Hägglund, advocating for something modelled on the Tea Party movement in the United States.

And despite all the turmoil and speaking on the last day of Almedalen, the buzz on the ground in Visby was that Hägglund actually had the best party leader speech of the week.

He spoke without notes and most journalists thought it was ideological and compelling. More importantly, perhaps, he managed to convince his own party, including the wing that last wanted to replace him with Odell.

One convert is Ebba Bush, the 25-year-old deputy mayor of Uppsala and firmly in the party’s far-right faction who said Hägglund had done a “good job”. (On her Facebook page there are pictures of her shooting with a rifle and standing outside Downing Street).

In the crowd, one could also hear young Christian Democrats saying things like “gold, pure gold”.

So while Hägglund has managed to boost his credibility within the party, the question remains as to whether he can convince the electorate.

When he came on stage he was determined to change some of the party’s bad image, even resorting to having rock music playing ahead of the speech.

The themes of Hägglund’s speech were social cohesion and tolerance. His slogan that it was possible to achieve “solidarity without socialism” received cheers, in particular, from some young Christian Democrats in the audience.

His defense of his and the government’s record boiled down to this: “now the welfare system has been adjusted to the user” rather than opposite.

According to Hägglund “the time for monopolies is over” and the concept of state individualism is “not as nice as rosé wine”, referring to the drink of choice during Almedalen.

His vision was of a “strong society, not a big state”, taking aim at Social Democrat head Stefan Löfven, calling him a silent circus leader: “seldom has anyone said so little, about so much in such a short time”.

The paraphrased Churchill metaphor drew a lot of laughter from the crowd.

When all was said and done, Hägglund highlighted three main themes for the future of the Christian Democrats: solidarity without socialism, equality with streamlining, and freedom without egoism.

We’ll just have to wait and see whether or not the voters buy the message too.

David Lindén is a PhD student in history at King’s College London who is serving as the acting political editor for Länstidningen in Södertälje for the summer 2012. Follow him on Twitter at @davidlinden1.