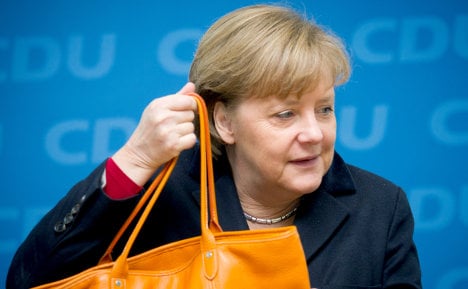 Her rating for June was eight percent higher than in May, according to Friday’s ARD Deutschlandtrend poll. It is her best showing since shortly after her 2009 reelection.

And nearly 60 percent of those asked support her euro crisis strategy, describing it as “right and decisive,” the poll showed. Not that this has allayed their fears that the worst of the crisis lies ahead, with 85 percent agreeing with that statement.

She received a pasting this week from a group of 170 top economists who criticised her euro strategy, saying she was bowing too much to pressure from other European countries, and warning against any sharing of bank debts.

Other economists have since leapt to her defence, as did Dieter Hundt, president of the German Employers’ Association. “I am convinced that her course in the Europe question remains the right one,” he told the Saturday edition of the Südwest Presse newspaper.

And although Merkel’s conservative Christian Democratic Union (CDU) remained clearly ahead in voter support with 35 percent, her current and preferred future coalition partner, the Free Democratic Party, again fell below the five-percent hurdle needed to get parliamentary seats.

The centre-left Social Democratic Party was on 30 percent, the Greens on 14 percent and the far-left Linke and Pirate parties both on seven percent according to the poll.