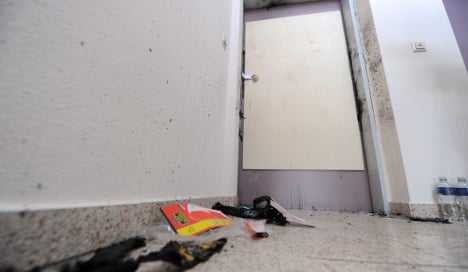 The 55 year-old man, who has not been named, died along with his four victims in Karlsruhe on Wednesday. He was originally from the Alsace region, a police spokesman said on Thursday. The spokesman could not confirm whether the man also had German nationality.

He had been living with his 55-year-old partner in her Karlsruhe flat just 70 kilometres from the French border. But she had fallen behind with maintenance payments and the property was sold off in April, the Tagesspiegel newspaper wrote late on Wednesday evening.

The new owner wanted to live there himself – and told the couple they would have to move out. The imminent eviction had “shaken his personal existence” to the core, one investigator told the paper.

The presence of a small arsenal of weapons and materials to restrain his captives suggests the “execution”-style murders were premeditated, police added. They found two pistols, a shotgun, a “gun with a long magazine,” a large amount of ammunition and a disabled hand grenade in his flat. The collection could have sustained a long shoot-out with officers.

Investigations are being carried out into how he got the weapons – where he got them, and whether they were legal.

Post-mortem examinations of the victims and the gunman are due to take place in Heidelberg on Friday, from which police are hoping to be able to gain a clearer picture of Wednesday’s dramatic events.

The Tagesspiegel said the bailiff, locksmith and social worker arrived at the flat at 8am to evict the couple – the furniture removal van was waiting outside. The gunman let them in, but then took them hostage, forcing the locksmith to tie the others up, wrote the paper. Later the new owner arrived and was also tied up with the others.

The locksmith made a grab for the gunman’s weapon but failed to disarm him and was fatally shot. The gunman then spent an hour drinking beer and watching the other hostages, before he freed the social worker who immediately called police.

The social worker said he heard further shots as he ran down the stairs, wrote the Tagesspiegel. Police spent three hours outside the flat as negotiators tried and failed to contact him. A smell of burning prompted them to storm the property – the gunman had set the carpet on fire after killing the remaining hostages. By the time police got inside he had also shot himself dead.

They also discovered the body of the gunman’s girlfriend on the bed, killed by a shot to the chest. It’s unclear whether she was already dead when the hostages were taken captive.

The locksmith, 33, who leaves behind two children and a heavily pregnant widow, had only stepped in at the last minute to lend a hand, a friend of his told the Bild newspaper on Thursday. The bailiff, 47, also leaves behind a family.

The French gunman had robbed a shop armed with a knife in 2003, but had not been considered violent or dangerous by authorities.