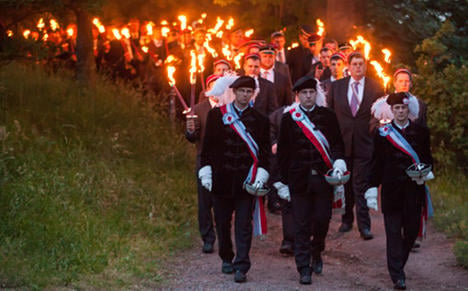 Two senior members of the Burschenschaft fraternity association faced each other in a court in Bonn on Wednesday. One was trying to get an injunction to stop the other saying he was probably a leading figure in an extremist right wing network he claims links the student group with the neo-Nazi NDP party and illegal neo-Nazi groups.

The Burschenschaft movement could split if it failed to clear itself of neo-Nazis, one former member told The Local. A significant group has emerged to openly fight political extremism within the fraternity organisation.

“Since reunification, certain strains of the Burschenschaft have become increasingly extremist,” the former member said, and although the association was founded on conservative values, “fascism has no place in the organisation.”

Yet approximately 1,500 of the 10,000 members are thought to align themselves with an unacceptable form of extremist nationalism.

Frustrated with the growing presence of extremism within their ranks, five Burschenschaft board members resigned in June in what was one of the biggest gestures of anti-fascist sentiment in Germany’s traditional, almost exclusively male, student fraternity system.

Their decision fit with the anti-fascist grouping Burschenschafter gegen Neonazis, who want to stamp out extremism and turn the fraternity movement into something modern and more liberal.

The conflict had been problematic for the former member who spoke to The Local. He had joined while a student, keen to spend time with other conservatives. Yet the increasingly obvious far-right sentiment in the organisation sickened him and, with a heavy heart, he left.

Departure was a bold move because Burschenschaft membership is considered a life-long commitment – and can be of professional advantage thanks to an extensive network of contacts and tradition of helping each other.

Yet he is no longer the alone in deserting the central group. He told The Local that whole branches were choosing to leave the umbrella organisation that runs most of the Burschenschaft fraternities in Germany, the Dachverband der Deutschen Burschenschaft (DB).

Sick of the group’s increasingly unsavoury political reputation, an increasing number of branches are bowing out. Exit frees a fraternity from pressure applied by the ruling body to adopt, for example, a race-based entrance policy for new members.

Peer pressure and the overriding principle of loyal fraternity silence those who might want to speak out, the former member said.

“Even if members do not agree with what one of their frat-mates is saying, they probably would not speak out against it because in a fraternity loyalty is so important,” he said.

The association could find itself struggling to recruit new members, if left with a dwindling network of important contacts and a reputation for harbouring racism and extremism. Traditions which have defined the Burschenschaft for centuries could start disappearing from Germany’s academic and professional worlds.

Yet the bonds of fraternity were broken on Wednesday when the anti-fascist group’s founder Christian Becker faced reputed extremist Norbert Weidner in court. It was Weidner’s re-election to edit the fraternity association’s newspaper that prompted the five board members to resign in June.

Although Weidner’s political views offend many fraternity members, he manages to retain positions of influence within the association.

Becker had posted several blog entries saying Weidner was one of the driving forces of neo-Nazism in the association, claiming that he had hacked members’ computers and was trying to form an extremist splinter group, the Süddeutsche Zeitung newspaper reported. A petition emailed around frat-houses garnered more than 300 signatures of support from other members.

Weidner applied for an injunction to prevent Becker making allegations against him.

Divisions within the fraternity system appear to be widening. The annual meet-up – normally a grand event full of pomp and tradition – was shut down early following the mass-resignation. It has been rescheduled for the winter, but critics do not believe it will happen, the Süddeutsche Zeitung reported.

While the court case continues, the judge offered some hope to fascist-fighter Becker, who has set his sights on “driving them [far-right extremists] crazy, then hauling all of them in front of a judge,” he told Spiegel Online recently.

The court’s press office said on Wednesday his blogging was likely to be considered protected under freedom of speech.