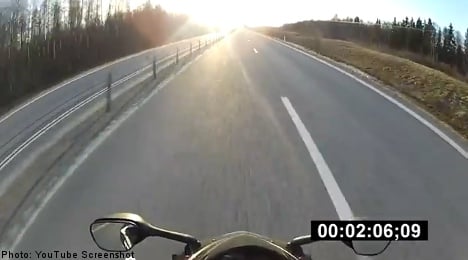 The anonymous rider’s latest video on YouTube shows him racing from Luleå to Boden, both in northern Sweden, in just eight minutes – a journey which should take 27 minutes if the legal speed limits were followed.

Now, the rider has spoken out about his latest ride, in which he hit speeds of 280 kilometres per hour with the sun directly in his eyes.

“I saw almost nothing at all and just took my chances. When you’re driving at 280 kilometres an hour you don’t have any time to focus on anything,” he told the local Norrländska Socialdemokraten (NSD) newspaper.

“It was purely an impulsive thing. We were sitting at home on a Sunday and didn’t have much to do. My friend had a helmet camera, so I came up with the ‘smart’ idea to drive from Luleå to Boden as quickly as possible.”

The clip shows a few near misses, including one occasion where the rider overtakes a truck on a stretch of road under repair.

However, views of near misses and breakneck speeds are nothing new for internet fans of the mysterious Ghostrider — or Ghostriders — whose videos have spawned a cult following since they first appeared in 2002.

YouTube also features a number of “Ghostrider” clips which have received millions of views, turning the mysterious motorcycle rider into a celebrated folk hero among rebellious web surfers and motorcycle enthusiasts.

But not everyone is impressed by this latest daredevil’s antics.

“Mum and Dad were sad after seeing the video. There were many tears – it wasn’t nice at all. I felt bad for a few days afterwards,” he told the paper.

While the 23-year-old confesses he has “always done dumb things”, he has a message for anyone watching at home.

“Don’t even try it. People should not be injured just because they’ve been inspired by someone driving fast,” he told the paper.