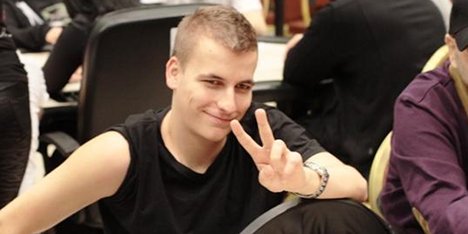 Ok, it’s the World Series of Poker, it’s Las Vegas, and it’s the US, so obviously it’s about big numbers and outrageous events, but the original idea that led to the $1m BIG ONE is actually a charitable one.

Canadian multi-millionaire and Cirque du Soleil founder Guy Laliberté is a supporter of charity organizations, partly because there were times when he was so poor he had to live on the street.

He is also a passionate poker player.

It was Lalibertés idea to host a super high roller event and give a part of the price pool to charity. It was agreed to give 11% of the price pool away. With 48 players playing in the event, the charity organization ONE DROP will receive 5.5 million dollars.

The two German players who are taking part in this exclusive tournament have had considerable success in high roller tournaments.

Carlo, a tournament he won one year ago. Philipp Gruissem ended up in third place in the aforementioned tournament, and among others, he won the high roller events fot the EPTs in London and Barcelona in 2011.

Still, even for those players it would be a high risk to put up one million dollar as a single buy-in, which is why most players sell shares. What that means is, that you can pay a specific percentage of a player’s buy-in, and if the player wins money, you get the same percentage of the price.

Of course, if they don’t make it into the money, you don’t get anything.

So, neither Reinkemeier nor Gruissem have spent a million dollars to play in the BIG ONE. They’ve had several supporters, or backers, as they call them in poker, who invested their own money into the players, hoping that one of them would win the first price, which amounts to a little over 18 million dollars.

If you had given one of these players €1000, equivalent to 0.1% of the price money, and that player won the tournament, you would have gotten more than €18.000 back. Quite a nice return on your investment, isn’t it?

Gruissem and Reinkemeier are among the elite players in Germany, but to win the BIG ONE, they had to beat the best players worldwide – and some of the richest amateurs worldwide, which made up almost half of the field.

As it turned out, none of our German heroes made the money, so all the backers lost theirs. Somehow, these days the Germans seem to keep missing finals…