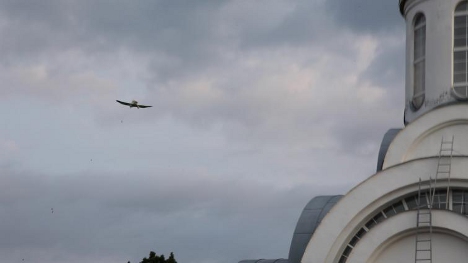 The footage, shot from the ground in the town of Ivianiec, shows a small, single engine Jodel aircraft cruising in over the city, located about 75 kilometres west of Minsk.

Several small objects with what appear to be parachutes can be seen floating down from the plane over the city with its landmark Church of Saint Euphrosyne clearly visible in the video.

In the video (embedded below), a banner can be seen with text referencing Belarusian independence, which was celebrated on Tuesday, July 3rd.

However, the manager of the only hotel in Ivianiec told The Local that, as far as she knew, no teddy bears had been found.

“We haven’t seen any teddy bears or any other kind of bears falling from the sky,” she said.

“We can see the church from the hotel. I was tending my tomatoes early this morning and I’m sure I would have heard something.”

While the stated goal of the stunt, organized by Swedish public relations firm Studio Total, had been to drop the plane’s cargo of 1,000 pro-democracy teddy bears on the presidential palace in Minsk, they now claim they were forced to divert after being contacted by airport radio operators on the ground.

“We got a call from the airport in Russian and we got a bit nervous,” the pilot told The Local.

“Storm clouds were also looming at the start of the journey, but we managed to get in and out without any real problems.”

Despite denials from the Belarusian Ministry of Defence, as well as a lack of reports from residents of Minsk or Ivianiec of having seen any teddy bears falling from the sky, representatives from Studio Total remain adamant that the pilots did fly the small plane in and out of Belarus in a show of solidarity with groups fighting to bring an end to the rule of president Alexander Lukashenko.

“I can assure you that the plane flew into Belarusian airspace. This was not some sort of hoax,” Tomas Mazetti of Studio Total told The Local.

Several media outlets remained sceptical about the teddy bear “bombardment” of Belarus, as Studio Total has been known to pull the wool over journalists’ eyes in the past.

In 2005, Studio Total made a splash when it launched the fictional Kulturpartiet (‘Culture Party’) which turned out to be a PR gimmick carried out to spark a debate on culture issues.

And in 2011, Studio Total fooled journalists around the world with the launch of the fictional Austrian International School of Sex (AISOS), which in reality was part of a publicity campaign meant to draw attention to Austria’s low birth rate.

“I can’t say it 100 percent, but it certainly seems improbable,” he told Resumé, pointing out that no opposition groups were discussing the action later in the day.

“It’s one thing to make something up about a sex school, but the fight for free speech in Belarus is not a joking matter,” he said.

“This campaign is credible and has helped draw attention to an issue we feel is very important…we’re good at getting attention so we wanted to use what we were good at.”

He explained, however, that the teddy bear stunt wasn’t meant to prompt debate about how well media outlets check their facts, but rather to support groups like Charter 97 and “Tell the Truth!” which are fighting for free speech in Belarus – a country ruled since 1994 by Lukashenko, who is often referred to as “Europe’s last dictator”.

Editor’s note: following the release of additional details by Studio Total as well as teddy bear sightings on the ground in Belarus, the flight has since been confirmed. Read more in The Local’s follow-up story: Belarus teddy bear ‘bombers’ unmasked

German airline Lufthansa told AFP that the Russian authorities had finally granted it clearance for passenger flights to Russia in June.

“That means Lufthansa flights to Moscow and Saint Petersburg can be operated as planned,” said a spokeswoman for the airline.

In Russia, Mikhail Poluboyarinov, chief executive of Aeroflot told the TASS news agency: “Everything is fine, we have received all the authorisations.”

And another Russian airline, S7, said it too had received clearance for its flights to Germany, the Ria Novosti agency reported.

Earlier Wednesday, Germany’s transport ministry said it had blocked flights operated by Russian airlines from arriving in its territory after Moscow failed to provide authorisations for Lufthansa.

Two Russia-bound Lufthansa flights due to depart earlier Wednesday from Germany had been cancelled because Russian authorities did not provide the necessary permits for them in time, the ministry said.

“Due to the reciprocal practice, the Federal Aviation Authority also did not issue any further permits for flights operated by Russian airlines as long as authorisations are pending on the Russian side,” it added.

Three Aeroflot flights were affected by the cancellations on Tuesday and another four on Wednesday, the ministry said.

“Once permits for Lufthansa flights are granted by the Russian site, the flights of Russian airlines will also be authorised,” it added.

Neither the ministry nor the airlines concerned mentioned the reason for the flights being blocked.

But some flights operated by European airlines including Air France and Austrian Airlines — a subsidiary of Lufthansa — were cancelled last week after Moscow rejected flight plans that would have skipped Belarusian airspace.

Lufthansa has confirmed that it is no longer flying over Belarus after the EU urged airlines to avoid the country’s airspace.

The EU’s advice came after the Belarusian regime forced the diversion of a Ryanair Athens-Vilnius plane to Minsk in order to arrest an opposition journalist on board.

Moscow last week said the cancellation of several European flights to Moscow was down to “technical reasons”.

Eurocontrol, which coordinates air traffic control in the EU, said flights between Europe and Russia “have permission to use defined air corridors.

“If one company changes these routes, there has to be prior agreement between the company concerned and Russia.”