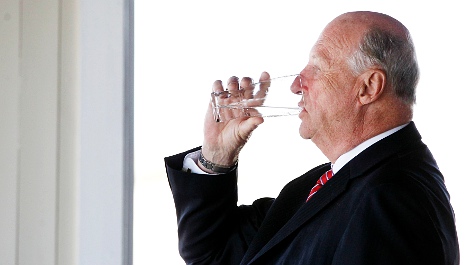 Members of Parliament Snorre Valen and Hallgeir Langeland have called on Norway to change the constitution in order to turn the country into a republic, replacing King Harald with an elected head of state.

“It should not be possible to inherit power and positions. It’s high time this was changed,” said Valen.

Although this is the twelfth time the Socialist Left (Sosialistisk Venstreparti – SV) has motioned for the monarchy to be dismantled, never before has it offered the option of a transition phase.

The two politicians hope other parties will sign up to their plan, which would put the issue to a referendum. Should the people vote to get rid of the monarch, King Harald would be given some time to adjust before his notice period elapses.

Ideally, the changeover could be timed to coincide with the bicentenary of the Norwegian constitution in 2014, Valen said.

"A transition to a republic would be the natural end point to the democratization process that started in 1814 and was finalized when parliament took away the last remnants of formal power from the king when the union [with Sweden] was dissolved," according to the proposal.

Valen and Langeland asked parliament to decide what sort of powers a president should have were their proposal to become a reality.

They also requested legislators to figure out how often a presidential election should be held.

“Most people are really republicans. Now it’s time to change this old-fashioned form of governing a modern country, said Valen.

This may be wishful thinking on Valen’s part: studies have shown that the monarchy enjoys the support of 60-70 percent of the Norwegian population.

A photo reportedly of King Harald on the way to hospital last week. Photo: AFP

The Norwegian palace confirmed to news wire NTB that the king was to leave hospital following the procedure three days ago.

“The king is in good form and will travel home from Rikshospitalet today,” the king’s doctor, consultant Bjørn Bendz, said in the statement.

The palace had confirmed during the weekend that the king was well after the procedure to fix an artificial valve he received during a previous operation in 2005.

Artificial valves of the type the king received have a life span of 10-15 years. As such, it is not uncommon for them to be replaced.

“His majesty the king is well after yesterday’s intervention. The king has been for a short stroll, and his condition is good,” Bendz said in a statement on Saturday.

Last month, the king spent a short time in hospital due to respiratory problems unrelated to Covid-19.

He is currently on indefinite sick leave, with his son Crown Prince Haakon deputising the king’s royal duties.