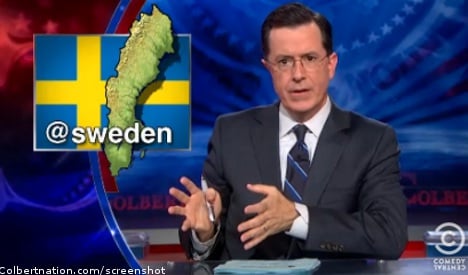 In what many hailed as an unexpected and unusual move, Swedish officials told the US comedian that he could not take over the @sweden Twitter account on Wednesday after Colbert’s much publicized #ArtificialSwedener campaign.

Maria Ziv, the director of marketing of Visit Sweden, one of the organization’s behind the initiative, explained to The Local on Thursday that Colbert’s Twitter style, along with her agency’s fear of selling out, were the two main reasons behind the decision.

“We started this initiative to create a sense of closeness and a dialogue between the curator and the followers, in the aim of giving a perspective of Sweden and its culture,” she said, referencing the Curators of Sweden campaign.

“When we looked at Stephen Colbert’s official Twitter account, we saw that while he did have 3.6 million followers – he followed no one in return.”

She went on to explain that Visit Sweden ultimately had serious reservations about whether Colbert would be a good fit and what sort of signals a “yes” would have sent.

“He is a Twitter ‘broadcaster’ and this doesn’t align with our goals. Our decision was that we wouldn’t cave in and sell out, just because he’s famous. We decided that a Colbert takeover would have served him, not us,” she said.

After the publicity surrounding Colbert’s #ArtificialSwedener campaign added some 40,000 followers to the @sweden account, the team at Visit Sweden intensified their discussions about the rules of who can curate the account, Ziv explained.

Initially, the rules stated that a curator had to be a Swedish citizen in Sweden to run the account. Since then, Swedes living abroad have taken the helm, too.

But Ziv explained that officials at Visit Sweden and the Swedish Institute are keen to take things further.

“We’re currently discussing the possibility of letting anyone who lives in Sweden to have the chance to curate,” she said.

According to Ziv, the idea is to consider anyone at all living in Sweden, whether they have permanent residency or are just an exchange student.

“These people are the ones with a fresh and unique perspective of the country, something we consider would be completely relevant to visitors,” she added.

But this doesn’t mean that the door is closed to celebrities like Colbert in the future.

“Who knows, in the future we may have honorary Tweeters – providing they are interactive, of course,” Ziv said.

“We actually mentioned Will Ferrell at one point, as he has a Swedish wife, but I don’t want to go on about that – I wouldn’t want to make Mr Colbert cross,” Ziv told The Local.