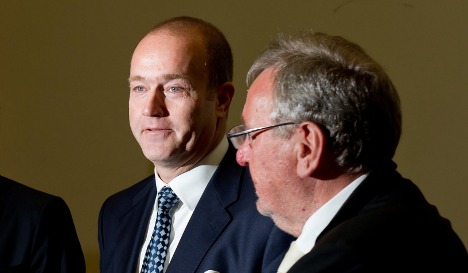 Gerhard Gribkowsky, 54, who was risk manager at the Bayern Landesbank, admitted taking the bribe from Ecclestone in 2006.

He took the payment in return for ensuring that a majority share of Formula 1 rights, which fell to the bank following the bankruptcy of the Kirch media group, were sold to Ecclestone’s preferred candidate.

He also did not declare the money to the German tax authorities, moving it instead to Austria to found a charity.

During his final arguments on Wednesday in Munich district court chief prosecutor Christoph Rodler accused Gribkowsky of “immense criminal energy”. But the banker’s defence team argued Gribkowsky had been seduced by Ecclestone.

The entire case severely implicated Ecclestone, who is also being investigated by German prosecutors. In his trial testimony, Ecclestone claimed the banker had blackmailed him for the money – something rejected by Rodler on Tuesday.

Gribkowsky had “dropped his trousers” with his detailed confession last week, his lawyers said – in return for the court agreeing to limit any jail sentence to less than nine years.

“Today one would want to turn back time. Sadly that is not possible,” said Gribkowsky.

The court sentenced him to eight-and-a-half years.