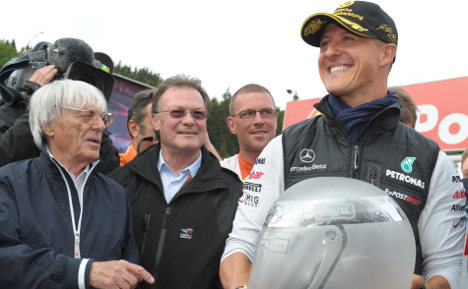 The Stuttgart-based auto maker “immediately investigates immoral or corrupt practices of staff or on the side of business partners,” a spokeswoman said on Tuesday.

As 60 percent owner of the Mercedes AMG Petronas Formula 1 team which has Schumacher and Nico Rosberg driving its cars, Daimler is currently very much in business with Formula 1 manager Ecclestone.

German prosecutors are investigating him on suspicion of bribery. Chief prosecutor Christoph Rodler told a court on Tuesday, “Ecclestone was not the victim of blackmail, rather a co-perpetrator in bribery.”

The prosecutor was speaking in the closing phase of a case against a banker accused of taking a $44 million bribe from Ecclestone to ensure his bank sold a major share in Formula 1 rights to Ecclestone’s favoured candidate.

The Handelsblatt newspaper noted on Tuesday that Daimler’s own operating rules could force it to consider withdrawing from the sport. Laurenz Schmitt from Linklaters law firm told the paper it was an “awkward” situation.

The Daimler spokeswoman said, “We support the explanation of the new allegations in Formula 1. We are awaiting the analysis of the authorities.”

She said compliance was of central importance to Daimler.

Former risk manager at the Bayern Landesbank Gerhard Gribkowsky admitted taking the bribe after months of silence before the Munich court hearing the case. His admission seriously implicated Ecclestone.

This had resulted in around 40 witnesses being called, including Ecclestone. He then admitted paying Gribkowsky the money, but said it was a case of blackmail –that the banker had been threatening to give sensitive information to the British tax office.

But on Tuesday the prosecutor in the Gribkowsky case told the court, “Ecclestone was not the victim of blackmail, rather a co-perpetrator in bribery.”

Prosecutor Christoph Rodler said the allegations of bribery and tax evasion against Gribkowsky were proven. He had, “not received a consultant fee, rather bribery payments” from Ecclestone, he said.

The prosecutor is already investigating Ecclestone on suspicion of bribery.