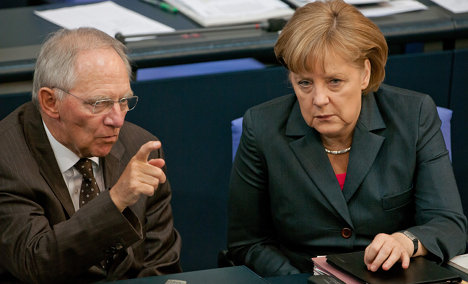 “We are of the view that much can and will be done in Europe using the [existing] legal basis,” spokesman Steffen Seibert told a news conference.

“But these debates are for tomorrow and the day after tomorrow, not for today,” he added.

Seibert was reacting to an interview given by Finance Minister Wolfgang Schäuble in Monday’s edition of Spiegel news magazine, in which he said: “One can give more power to Brussels but the German people will have to have their say.”

“That could happen sooner than I thought a few months ago,” Schäuble added, saying such a popular vote was conceivable within the next five years.

Schäuble, one of Europe’s most experienced politicians, reiterated his idea that the 27-nation EU needed to be much more like a country in its own right.

“The [European] Commission should become a genuine government and for that it needs to be elected by the parliament or by the direct election of its president. I am for the second option,” he told Spiegel.

Seibert said that Chancellor Angela Merkel, who has repeated frequently her belief that more Europe, not less, is the correct response to the crisis, broadly shared Schäuble’s analysis.

“The chancellor completely shared the basic thinking [of Schäuble], that more integration is necessary,” Seibert said.