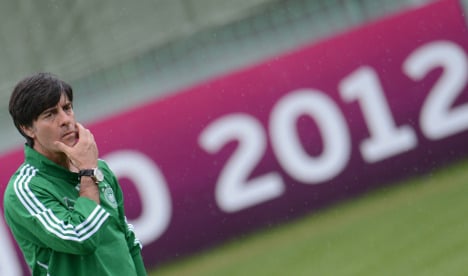 Defeat against Italy would be a rude shock for Germany having swept aside every team they have faced so far, including Portugal, whom they beat 1-0, and won all their qualifiers.

Victory in the final would complete a process begun before the 2006 World Cup under Jürgen Klinsmann and which has been taken on leaps and bounds since then by his former assistant Joachim Löw.

While Löw has shown a fearlessness – some said recklessness – in bringing in a trio of fresh attacking players for the quarter-final with Greece.

It would nonetheless be a relief that his chief playmaker Bastian Schweinsteiger looks set to be given the all-clear for Thursday’s Euro 2012 semi-final against Italy with midfield partner Mesut Özil emphasising how much the Germans “need him”.

The 27-year-old Schweinsteiger has been struggling to recover from an ankle injury and was below-par in Friday’s 4-2 win over Greece. He is considered a key element in the German bid to win Euro 2012.

Germany play Italy in the semi-final in Warsaw on Thursday and the Bayern Munich star is expected to be fit to face the Azzurri.

“He has problems with the ankle, which has been treated intensively in the last few days, we assume he will be fit to play,” said Germany’s goalkeeping coach Andreas Kopke on Monday.

Having torn ankle ligaments in February, Schweinsteiger admitted Sunday the joint had still not fully recovered, but Özil said he is needed against the Azzurri.

“We need Schweinsteiger, He is a class player and one of our leaders,” said Real Madrid star Özil after Schweinsteiger set up both Germany’s goals in their 2-1 win over Holland in their second group match.

“He has been injured, but I think he is on a good track. You could see how important he is for the team in our match against Holland (a 2-1 victory in the group stage), I am keeping my fingers crossed he will play.”

Italy have shown a spirit and an attacking philosophy at odds with their usual style at major finals and in 33-year-old Andrea Pirlo they perhaps have the player of the tournament so far, whose radar-like passing and vision is almost unparalleled.

However, with less time to rest and prepare for Germany after a gruelling, if deserved penalty shoot-out win over England, it will take something special to stop the Germans.

While Germany have produced a string of vibrant and eye-catching performances as they seek their first title in 16 years, the Spanish may have been clinical, yet have not looked the unbeatable force of both four years ago and the 2010 World Cup.

That latter theory will be the first to be put to the test as the Spaniards take on their Iberian rivals Portugal in Donetsk, Ukraine, on Wednesday.

Portugal will not be the same tame side that Spain beat 1-0 in the second round of the 2010 World Cup, instead a confident outfit under Paulo Bento, who replaced the uninspiring Carlos Queiroz early in the Euro qualifying campaign.

What has rounded the circle for them has been that Cristiano Ronaldo, who terrorises club defences around Europe, has finally surfaced and begun to bury the impression that he fails to perform at the same level for the national side.

Three goals and outstanding performances in the last two games against the hapless Dutch and a defensive-minded Czech Republic have given Ronaldo the momentum he requires to tackle an altogether more imposing opponent in the Spanish.

But fullback Joao Pereira, whom Bento gave his debut at the relatively late age of 26 and has impressed at the tournament, said that aside from the individual brilliance of Ronaldo the team has a unity that gives it great strength.

“Each side has a 50 percent chance (of qualifying for the final),” said the former Sporting Lisbon defender, who signed for La Liga outfit Valencia in May for a reported €3.5 million euros.

“We must have a healthy respect for Spain but we are not going to respect them too much because we, too, have great players of great value to us.”

Spain disposed of France with the minimum of fuss and yet again Vicente del Bosque’s decision not to start with a recognised striker paid off, as defensive midfielder Xabi Alonso scored both goals.

However, of more concern to Del Bosque is that his rivals will have had more time to rest and begin preparing for the semi-final.

“We are going to recuperate well (but) this 48 hours difference between games compared with our rivals is a bit of a handicap. We suffered in the heat and that’s tough on players at this time of year,” said Del Bosque.