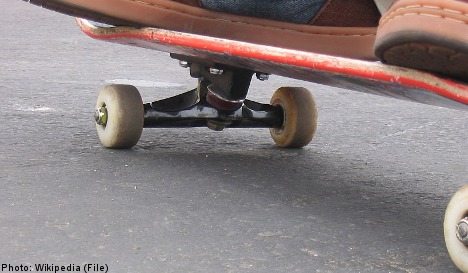 The incident took place last Wednesday while the teen was riding his skateboard in the town of Värnamo, located in central Sweden, about 70 kilometres south of Jönköping, the local Värnamo.nu news website reported.

The woman, who is in her sixties, was walking with her daughter on a path designated for cyclists and pedestrians when the skateboarding teen crashed into her.

The impact sent the woman falling backwards causing her to hit her head on the pavement.

She was rushed to hospital following the crash, as was the 15-year-old, who reportedly suffered a number of minor fractures.

While the boy was released from hospital by the weekend, the condition of the woman failed to improve and on Sunday she died as a result of her injuries.

Police have since launched a wrongful death investigation in order to determine whether or not the 15-year-old should be formally charged for causing the woman’s death.

However, police have yet to interview either the victim’s daughter or the 15-year-old skateboarder for their accounts of what caused the fatal skateboarding collision.