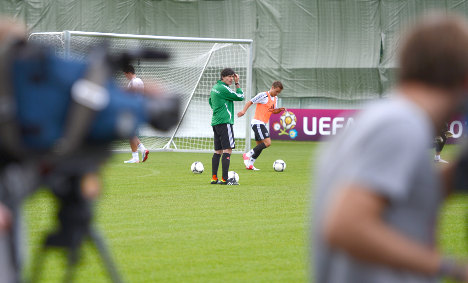 Löw sprung a surprise for Friday’s quarter-final by dropping Mario Gomez, Lukas Podolski and Thomas Müller for the Germans’ 4-2 quarter-final win over Greece at Arena Gdasnk, but the news was reported earlier that afternoon.

“I can’t say exactly from where this [leak] has come,” admitted Löw ahead of his team’s semi-final against England or Italy in Warsaw on Thursday.

“The players talk to their agents, perhaps it comes from there.

“They phone home and talk with friends, either because they are happy or disappointed.

“I am certain it doesn’t come from the players. These are other channels, but they are unidentifiable.

“It is not good when the cards are on the table so early.”

Team line-ups are normally only released just prior to kick-off, but Löw’s formation was reported much earlier by several German media outlets with the news that Miroslav Klose, Andre Schürrle and Marco Reus would all start.

After the latest leak, midfielder Schürrle revealed the national coach was fuming.

“It is certainly regrettable,” said the 21-year-old Bayer Leverkusen midfielder.

“The head coach has spoken to us about this leak and he is, of course, far from happy.

“I am sure it is someone outside the team, I can’t imagine it would be anyone inside.”

The team was branded “unstoppable” by a delighted German press on Saturday after victory over Greece put them just a match away from reaching a second successive Euro final, four years after being beaten by Spain.

“No-one else will stop us!” the online edition of the Bild tabloid said on its home page, adding: “And especially not the English or Italians.”

Germany won the match, in Gdansk, 4-2 with goals from captain Philipp Lahm, Sami Khedira, Miroslav Klose and Marco Reus, outclassing their opponents to set up a tie with either England or Italy, who play on Sunday.

Bild gave its best marks to Mesut Özil, whom, it assessed, “finally showed his world class” by being “part of the build-up to every German goal”.

“Germany blows up the Greek fortress,” said kicker.de. The sports site said that the 15th win in 15 games for Germany was “a world record”.

The Bild website for its part wrote that German Chancellor Angela Merkel, who was at the game, could celebrate “Greece’s sporting bankruptcy”.

“German rotation crowned a success. Coach Löw shows courage not seen for years and it pays off,” the paper said in its online edition.