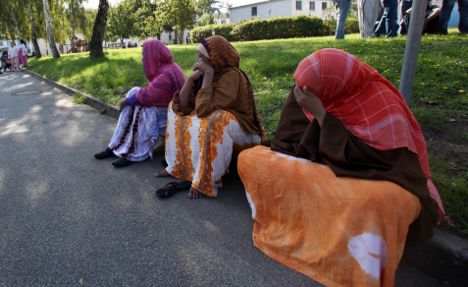 The Constitutional Court considered the matter on Wednesday, criticising the government for not treating people equally.

Kay Hailbronner, who represented the government in the court, warned of a possible shift in migration within Europe if Germany gave refugees more – a suggestion rejected by the court.

“The suggestion – they must be hungry for a bit and then they’ll leave – that is simply not acceptable,” said Judge Ferdinand Kirchhof.

Refugees get the same amount of money as in 1993, despite inflation at that point being around 30 percent, the Frankfurter Rundschau reported on Thursday.

Judge Susanne Baer said an adult refugee was given around €220 a month– yet the very lowest amount paid to unemployed Germans, known as Hartz IV, was €364 a month. Both groups have accommodation paid for.

The children of refugees receive up to 47 percent less state support than German children in similar situations.

Currently around 130,000 refugees, asylum seekers and those foreigners who are legally tolerated in Germany but do not have any higher status, live on this amount of money – a sum that has not changed for nearly two decades.

This lowest level was initially planned to only apply for a person’s first year in Germany, but that has long been extended to cover four years – after this time those concerned become entitled to Hartz IV payments.

The German state governments, which are responsible for administering the payments, do so in different ways. Bavaria for instance only gives vouchers, while other states offer a mix of vouchers and cash, or just cash.

State Secretary in the Labour Ministry Annette Niederfranke told the court on Wednesday that attempts by the federal government to increase the payments to at least keep pace with inflation over the years had failed due to a lack of cooperation from the state governments.

Rhineland Palatinate state government said it had been ready to increase the rates – but that the federal government had not prepared any draft reform to enable it to do so.

Niederfranke said her ministry was working on a new law but said it was having difficulty working out what refugees really needed –yet was determined to maintain the different rates of support for foreigners and Germans.

Judges Baer and Gabriele Britz both criticised the presumption that refugees and Germans should have differing needs and thus different entitlements. They pointed to the constitution which states that human rights are sacrosanct for all. This does not apply only to Germans, they said.

The court is due to rule on the matter after the summer.