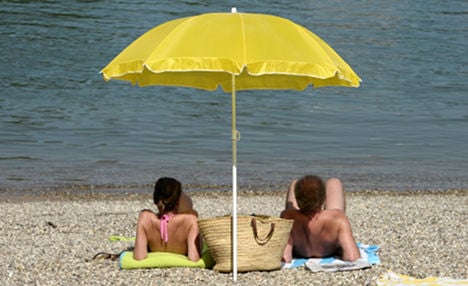 Only a third of people asked said that they had cut back their holiday plans because of the financial crisis this year. In Berlin in particular, the average holiday budget dropped by over €100 to €1,440.

Opinion polling firm YouGov asked 1,000 Germans about their 2012 summer plans and whether the unsettled economic climate had made them rethink their plans.

The results suggested the country’s young people were least affected by larger world problems when it came to getting some sunshine, as nearly three quarters of 18 to 24-year-olds said they would be going on holiday regardless.

Of those who said they had a holiday planned, 62 percent said that exploring new places and cultures was the most important part of a trip. Of the 18 to 34-year-olds, 67 percent of said this was integral for them, and so did 58 percent of over-55s.

Just under 30 percent overall said that their ideal holiday was sun, sea, sand and sangria – citing a beach holiday with plenty of relaxation as their ideal vacation. Ever the active nationality, 45 percent of Germans said they liked to do sport while enjoying time away.

Of the men asked, 51 percent said they liked playing sports on holiday, while just 39 percent of women agreed.

When it came to all-inclusive holiday packages, nearly half of Germans admitted to having a soft spot for having everything they needed on their doorstep.

In a separate survey, researchers at Hamburg-based Foundation for Future Studies asked 4,000 Germans about their holiday experiences at home.

They found that of those who chose to “staycation” in Germany, their expectations were often exceeded, but that childcare could be a problem in hotels and campsites.

People asked told the foundation that they went to Austria for the scenery, Italy for the food and Croatia, Turkey or Spain for the beaches.

Finding a quiet spot to put down your beach towel can be pretty challenging during the peak summer period in Alicante.

The pandemic and ongoing travel restrictions mean many Spaniards are spending their holidays in the country, and the Valencian province is particularly popular among national tourists, just as it is with foreign visitors.

For peace seekers, that unfortunately means packed beaches and the usual hustle and bustle that comes with life in Spain.

However, Alicante’s coastline has lots of fairly unknown beaches and coves where you are less likely to encounter crowds. They may not all have fine white sand and all the usual amenities but their ruggedness and natural beauty are part of the charm.

Here are ten playas (beaches) and coves (calas) in Alicante where you may find the peace and quiet you’re after.