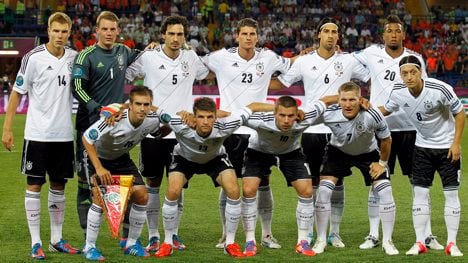 Worryingly for their Euro rivals, Schweinsteiger says the Germans are eager to play more of the high-tempo attacking football they have built a reputation for in their quest to win a fourth European crown.

Having so far earned wins over Portugal and Holland, Germany need just a point against Denmark in Kharkiv, Ukraine, to finish as Group B winners, but Schweinsteiger insists they want a third victory.

After grinding out a 1-0 win over Portugal in Lviv last Saturday, thanks to Mario Gomez’s first-half header, Germany then saw off World Cup finalists Holland 2-1 on a balmy night in Kharkiv on Wednesday with Gomez scoring twice.

As one of the team’s senior statesmen having made his debut just before Germany’s unsuccessful Euro 2004 campaign, Schweinsteiger is playing his third European championships, but he says the foundations of the current Euro success were laid at the 2010 World Cup.

Germany finished third in South Africa by playing an eye-catching brand of attacking football, which yielded knock-out wins over England and Argentina before losing to Spain in the semi-finals, to eventually finish third.

Schweinsteiger says he feels the Germans have added patience and the ability to control a game’s tempo to their attacking prowess and solid defence.

“I think the 2010 World Cup tournament did us the world of good,” said the 27-year-old, who has made 92 appearances for his country, scoring 23 goals.

“Many of the new guys earned a wealth of experience and sometimes that it might be a good idea to take a small break with the ball at your feet and let the opponent do the running.

“What we did (against the Dutch) is play well-time passes and avoided doing anything which could be energy sapping.

“We hope in the future we can play more attractive, free-flowing football which Germany is now known for.

“But even the Denmark game will be far from easy, they will be sitting deep and patience will be the name of the game. It is something we have learned.”

Germany carried their World Cup form into their Euro 2012 qualifying campaign as they finished with 10 wins from 10 matches.

On the back of his dazzling footwork, Özil was snapped up by Real Madrid from Werder Bremen.

Having made Germany’s Number One shirt his own in Africa, Neuer began to be courted by Bayern Munich before he left Schalke last summer for Bavaria.

Defenders Jerome Boateng and Holger Badstuber both came into Joachim Löw’s plans in South Africa and Bayern’s Boateng now looks to have secured the right-back berth.

Munich team-mate Badstuber has forged a strong centre-back partnership alongside Borussia Dortmund’s Mats Hummels and both were solid against Portugal and Holland.

As one of Germany’s world-class players, Neuer was only second-choice goalkeeper in May 2010 before injury to Hamburg’s Rene Adler meant the 26-year-old took over permanently after the World Cup.

“Prior to the 2010 tournament, it was in no way clear I would be Germany’s number one goalkeeper. “Now things are completely different and I am happy I have the responsibility for Germany between the posts. I just want to do justice to my role by keeping a clean sheet.”