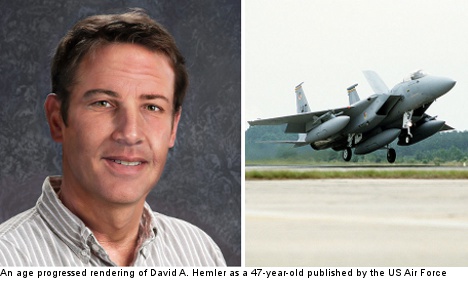 In October 1984, David Hemler was a 21-year-old airman when he abandoned the US Air Force's 6913th Electronic Security Squadron in Augsburg, Germany and eventually made his way to Stockholm, Sweden.

He assumed a new identity and managed to keep his past a secret for 28 years.

"I made up a story that I had run away from my parents while they were traveling but nobody believed it," he said in an interview published on Saturday in the Dagens Nyhter (DN) newspaper.

Hemler is registered in Sweden as being born in Zurich, but as a citizen of an unknown country. He received a Swedish residence permit in 1986 using a fictitious name consisting of the first name of an old friend and the last name of another.

He requested, however, that the name he has used in Sweden for nearly 30 years not be published.

Settled in Sweden, Hemler worked at a hamburger restaurant and within geriatric care before eventually enrolling in university in 1994.

Today, Hemler still lives in Stockholm, has three children, works for a public agency and marvels that he's been able to keep his past as a US military deserter secret for all these years.

"Sweden is a fantastic country for people like myself. Many people think it’s been horrible for me to carry this secret for such a long time, but I have mostly missed my parents," he told DN.

"I never intended to be gone for this long, rather the opposite. My thoughts wander when I cross the streets in Stockholm. I have always been afraid I would die before I could tell anyone."

While living a comfortable yet secret life in Sweden, Hemler become a wanted man, listed as a fugitive by the US Air Force Office of Special Investigations (AFOSI).

Fear that someone in the US might turn him in was one of the reasons why he never contacted his parents to explain that he was alive and well in Sweden.

"If I was exposed in Sweden, I feared I’d lose my residence permit. I didn’t want to leave my daughter, and with a dishonorable discharge I would never find a job, get no retirement and no medical benefits," he explained.

But after assurances from lawyers that his Swedish residence permit wouldn't be revoked and that extradition to the United States was "out of the question", Hemler contacted the agency a month ago to alert US authorities as to his whereabouts.

As AFOSI officials consider how to deal with Hemler's unusual circumstances, he's reached out to family members in the US who had no idea as to his whereabouts for nearly 30 years.

"I had expected and deserved a scolding. But nobody has reacted that way," he said.

"Everyone is just happy that I am alive."

Hemler's decision to leave the US Air Force without permission back in 1984 was due in part to frustration with US foreign policy under Ronald Reagan.

"How could our taxpayers be forced to arm terrorists like the Contras in Nicaragua?" he explained.

Following a denial of his request for a discharge based on his membership in a pacifist church, Hemler deserted.

While admitting he's missed the United States "enormously" while living in Sweden, Hemler remains frustrated by US foreign policy.

“Why do politics look like they do today when it was the US that armed the Taliban and the Iraqi dictator Saddam Hussein?"

The prospect of "a few weeks in jail, max" as a possible punishment for his 28 years on the run doesn't concern Hemler and he's happy to be the one making his story public.

“I don’t think I can keep this out of media, and I wanted to tell my story without pressure and in my own words," he told DN