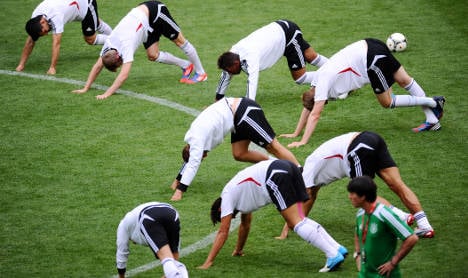 The tournament kicked off in the Polish capital Warsaw on Friday night, with Poland and Greece playing an eventful 1-1 draw and Russia flying to the top of Group A after thumping the Czech Republic 4-1 in the western city of Wroclaw.

Germany open their campaign in Lviv, western Ukraine, seeking to erase memories of their defeat in the final to Spain four years ago and their elimination to La Roja in the semi-finals of the World Cup in 2010.

The Mannschaft have a good record against the Seleccao, having eliminated them in the Euro 2008 quarter-finals and beating them in the third place play-off at the 2006 World Cup.

Captain Philipp Lahm, though, said those results would count for little, with the difficult Dutch and solid, if uninspiring, Danes to come in the so-called “Group of Death”.

“The tension is building slowly, we have been working for two years for this moment. It’s time to get going,” said Lahm, 28, who took over the captain’s armband after the tournament in South Africa.

“We have a great squad, we just need to show what we can do.”

Germany are likely to be boosted by inclusion of midfield talisman Bastian Schweinsteiger, despite worries over the calf strain he picked up in Bayern Munich’s Champions League final defeat to Chelsea last month.

But they are understandably wary of giving Portugal’s Real Madrid star Cristiano Ronaldo any chances around goal after he blasted 46 goals in La Liga last season.

Portugal coach Paulo Bento, meanwhile, has urged his team to be brave after a string of poor pre-tournament results, including a 3-1 friendly defeat in Lisbon to Turkey and last month’s 0-0 draw with Macedonia that hit confidence.

“Against a team like Germany you need to be organised,” he said. “You need to have courage because if you only think about defending, then surely you won’t be able to get a good result.

“You have to try to attack them but in an organised way. Above all we have to be strong, aggressive and cohesive, especially when we lose the ball.”

Dutch coach Bert van Marwijk is approaching the Oranje’s match in Kharkiv with caution, with veteran centreback Joris Mathijsen ruled out with a hamstring injury, and prior experience of Morten Olsen’s Danes.

Van Marwijk, who guided the Dutch to the 2010 World Cup final where they lost to Spain, said he expected the Danes to play in the same style they had done in their opening World Cup game in South Africa where the Dutch won 2-0.

He told reporters he thought the two games were comparable and there had been few changes in personnel.

“Like two years ago, I expect Denmark to be defensive and await the chance to counter-attack. All matches at major tournaments are difficult – and the two teams know each other too well,” he added.

The Dutch come into the match amid claims their players were targeted by racist chants from some fans watching their training this week in Poland – and with striker Klaas-Jan Huntelaar reportedly unhappy over the selection of Robin van Persie.

Veteran Danish manager Olsen, who is the only man to have been capped by and coached a national side more than 100 times, has played down his side’s chances in the group, casting the Scandinavians as underdogs.

The 62-year-old assessed the Dutch as “clearly the favourites”.

“It is not me being pessimistic but realism,” he said. “If we look at the talent of the Dutch, it is not lying to say they are the favourites.

“And it is not me bluffing. This will still be the case for us against Germany and Portugal… For us, our tournament will be a success if we progress from the group.”

The three leaders left in the early hours of Thursday, arriving into Kyiv on Thursday morning. After a visit to the heavily-bombed town of Irpin, they met Ukraine’s leader Volodymyr Zelensky.

It is the first time that the leaders of the three European Union countries have visited Kyiv since Russia’s February 24th invasion of Ukraine, and the visit comes as Kyiv is pushing for membership of the EU.

Macron has been paying a two-day visit to Romania and Moldova to discuss the ongoing crisis caused by Russia’s invasion of Ukraine.

There had been widespread speculation in France that he would combine the trip with a visit to Zelensky in Ukraine, but this was not confirmed until Thursday morning.

In a joint press conference with Romanian president Klaus Iohannis, Macron reiterated his desire that Ukraine should win the war, but added that eventually negotiations between Ukraine and Russia will be necessary.

Emmanuel Macron's joint press conference with Klaus Iohannis, the Romanian president. On #Ukraine, Macron says the position of France and Europe has been "clear since day one…first of all, to do everything possible to prevent it…secondly to sanction Russia…1/n