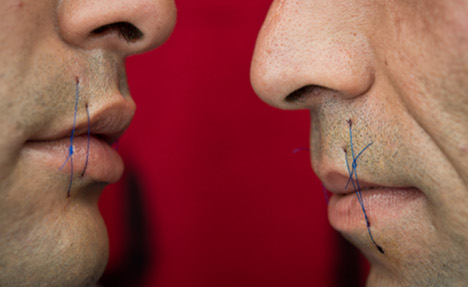 “They are only drinking through a straw,” said Soheil Hatamikia who helped organise a demonstration in the southern town of Würzburg where the protestors are sleeping in a tent.

Ten Iranian asylum-seekers have participated in the protest since March. They say they are persecuted in their own country but are unhappy at the conditions in the German state of Bavaria. So far, five of them have been granted political asylum.

“The German government should know it cannot stop our protest by means of silence and passiveness,” said the group on a blog established to support the protest.

The protesters criticise regulations obliging asylum-seekers to stay in shared lodgings and want a law forcing them to have a fixed abode abolished. They also want the right to work while waiting for their applications to be processed.

While the federal office for migration and refugees has, according the daily newspaper Süddeutsche Zeitung, supported the improvement of living conditions offered to asylum-seekers, it has deemed the latest development in the protest counterproductive.

A spokesman for the council told the paper that he would understand if politicians “felt emotionally blackmailed” by the protest tactic. He added that big changes take time and by putting so much pressure on people could reduce sympathy.

“If the government does not respond positively to our demands and does not make changes to the inhumane laws on asylum-seekers, then it will find that other asylum-seekers will join our action and sew up their lips,” the group added.

In 2011, more than 53,300 people claimed asylum in Germany. Since the beginning of 2012, the countries of origin with most asylum-seekers have been Afghanistan, Iraq, Serbia and Iran.