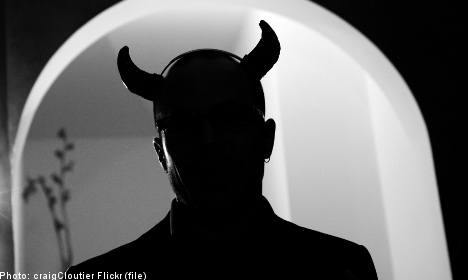 The man, from Falköping in southern Sweden, has had the number plate for five years; however it wasn’t until Friday that the Swedish Transport Agency (Transportstyrelsen) decided it should be disallowed.

When the time came for a renewal of the plates, the agency told the man that his triple six would be de-registered come Monday – even though they had given the plates the green light back in 2007.

According to the agency’s rules, “a personal plate may not be designed if it causes offence or harm to anyone else.”

“The number combination of 666 may be offensive to some,” wrote the agency in a letter to the man.

“The Swedish Transport Agency therefore has decided that you are no longer entitled to these personal number plates.”

The number 666 represents the antichrist or the devil in popular culture and is sometimes referred to as “the number of the beast”.

Some people take the number so seriously that they actively avoid it, a fear which is known as Hexakosioihexekontahexaphobia.

It is not known whether staff members suffer such a fear, or if the concern was for the residents of the Falköping community.