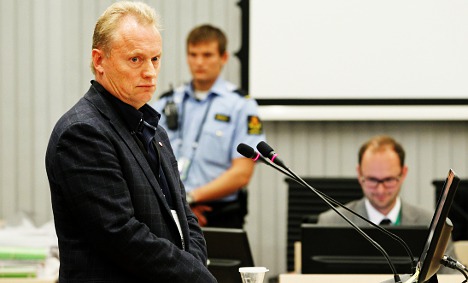 Party secretary Raymond Johansen insisted in his testimony to the Oslo district court that "diversity is fundamentally positive and enriches us both economically and culturally."

"From my point of view, the Labour Party has decided to deconstruct the Norwegian culture and to declare war on it," Breivik countered.

Coming after testimony on Tuesday from right-wing extremists who did not back Breivik's attacks but supported many of his views, including the alleged "Islamization" of Norway, Johansen had been called by the defence to testify about his party's immigration policies.

"Countries that are attractive to foreigners are the countries that win in global competition," he told the court on the 32nd day of the trial, acknowledging though that "there are large challenges linked to integration and we and the other parties have not always been good enough" at facing them.

Breivik, 33, blames the Labour Party for paving the way for the multiculturalism he claims is disintegrating Norwegian society and culture and leading to a "Muslim invasion" of the Scandinavian country and Europe.

Last July 22nd, the right-wing extremist first bombed a government building in Oslo, killing eight people, before going on a shooting rampage on the nearby Utøya island where the Labour Party's youth wing was hosting a summer camp.

He killed 69 people in his island massacre, most of them teens, with the youngest having just celebrated her 14th birthday.

"What does the Labour Party plan to do about the gradual deconstruction of the Norwegian ethnic group," Breivik asked in response to Johansen's comments, maintaining that people with blond hair and blue eyes, like himself, will have completely disappeared within the next 200 years.

Johansen however stressed that the Labour Party, like other democratically-minded political parties, had seen its membership numbers rise since the attacks.