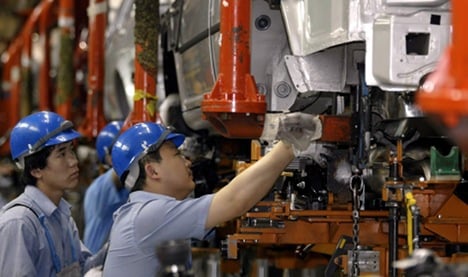 “This fundamental reorganisation is the right response to the increasing challenges,” Volkswagen CEO Martin Winterkorn said in a statement.

“At the same time we are laying the foundations for keeping the group and its brands on their successful course even in a difficult market environment.”

Under the realignment, a new group management department for China will be

set up under Jochem Heizmann, formerly in charge of commercial vehicles, “thus

underpinning the significance of the largest sales market in the world,” the statement said.

“The Volkswagen Group delivered some 2.3 million vehicles in the China region in the 2011 fiscal year and reported a pro rata operating profit there of €2.6 billion ($3.4 billion),” it noted.

On the commercial vehicles side, which VW called “the second pillar” of its success, Leif Oestling, head of Scania, will head a new department to enhance

cooperation between MAN, Scania and Volkswagen Commercial Vehicles to “harness the substantial worldwide growth potential in this segment.”

Volkswagen also announced a major reshuffle of top managers within the group from September 1 affecting brands including MAN, Scania, Audi, Bentley and Bugatti.

It said all the appointments had been made within the company, “including three female top managers who will assume responsibility at brand board of management level.”

Winterkorn said: “Our clear goal is to continue our successful course of recent years with great momentum and stability. I am convinced that now more than ever, the Volkswagen Group has the right people in the right positions to make our Strategy 2018 a success.”

While all VW brands have a high degree of operational autonomy and responsibility, “we are now further intensifying knowledge transfer and management links within the Group,” he added.

In April Volkswagen, whose makes also include Skoda and SEAT, said that profits raced ahead in the first three months of this year, driven by strong demand worldwide for all of its brands.