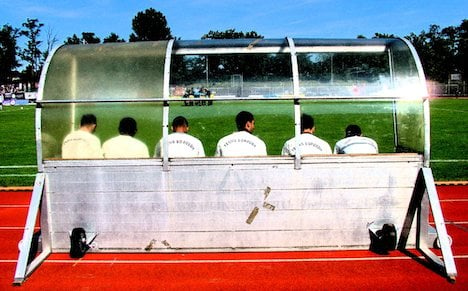 No Dice magazine’s talented photographer, Ian Stenhouse, has been to over 100 football matches in Berlin over the last year. An exhibition of some of his best images will double up as a No Dice’s Issue 3 launch party. Stop by to find out why it’s called the “Beautiful Game” and pick up your copy of the English-language mag covering the German capital’s footie scene.

A portrait of a lady. Sky-high in four-inch heels. Skin, smooth and milky white. The great German-American photographer Helmut Newton composed some of the 20th century’s most iconic shots of women. Fashion and nude images from his first three books White Women, Sleepless Nights, and Big Nudes are being shown together at a new exhibition in Berlin, which opens Saturday.

See The Local’s columnist Drew Portnoy up close and in person at his stand-up show “The Enemy’s in the Kinderzimmer.” So get a babysitter. Try to stay reasonably sober until midnight on a Saturday. And head down to Berlin’s leading joke shop for comedy in English, The Kookaburra.

There’s a new kind of world’s fair taking place in Berlin this month. It’s not the Belle Epoque hoopla of yore, but rather a more analytical type of shindig. One that considers global relations of the most un-discussed level and ponders the abstractness of catastrophic events. Intellectual indeed, but with an international amalgam of actors, artists, and architects pondering the current state of the world and its future, this fantastic fiesta is sure to be an event of the utmost excitement.

Social media’s role in the Syrian revolts, New Guinea warrior-farmers, and Christmas Eve in a Hamburg bar are a few of the topics explored in the films at this festival of documentary cinema. See some great non-fiction movies this weekend and be sure to catch Disquieting Nature an “abstract blues” video piece by artist Christine Meisner and composer William Tatge that screens Friday night with live musicians.

If your idea of a house is four walls and a roof think again. Japanese architect Sou Fujimoto turned the concept of home dwelling upside down with his radical designs. Check out a replica of Fujimoto’s “Final Wooden House” along with models, and objects that inspire his ideas at a new exhibition at the Kunsthalle Bielefeld.

A band of seven formed in Belgium of musicians from across Africa and Europe, Kel Assouf’s music is at once jubilant and compassionate. Nuanced vocal rhythms merge with mesmerising guitar riffs in a style of music known as “desert blues” that has its roots deep in the Sahara. Catch the troubadours Friday night in Cologne.

Carnival of Animals – Elephants and Rabbits in the Wallraf

If you’re five-years-old, your favorite kinds of artworks are probably paintings of animals. Lucky for you, there’s a new children’s tour at the Wallraf-Richartz-Museum in Cologne geared toward your type. On Sunday, the little ones can embark on a discovery adventure through the collection’s more zoologically inclined masterworks. It’s never too early to start learning about art.

Follow the sound of the Taiko drums and you’ll find a festival of Japanese culture Saturday in Düsseldorf. In celebration of the large Japanese population that makes its home in the city, the annual Japan Day festivities include traditional music, dancing, food and fireworks.

An Evening With Joan Baez

She’s been strumming strong for over half a century, singing about peace and freedom and campaigning around the world for human rights. If you’re among the masses who call the American folk icon a hero, here’s your chance to see the great lady live.

Gedok is home to a community of like-minded artists in Hamburg, and their new exhibition “Alice” opens Thursday. Stop by to check out the art and take in a performance by soprano Marcia Lemke-Kern and violinist Ewelina Nowicka who perform works by English composers like Jeremiah Clarke and Richard Causton.

The USA is the focus of one of the special programs in this festival of short film. “Untied Tastes of America” examines aspects of current American culture from television and advertising to stereotypes of African-American women in an economically challenged downtown. The program of 15 short films screens Thursday and Sunday. See it along with hundreds of other little cinematic gems in Hamburg this week.

All artists want their work to be realized (well most of them do anyway). And since the plays Matéi Visniec penned were barred from the stage in his native Romania, he fled to France. Smart move. Over two decades later Visniec’s works have been staged all over the world. See “3 Nights with Madox” this weekend in Munich. Written in French, Entity Theatre is performing the one-act play for the first time in English.