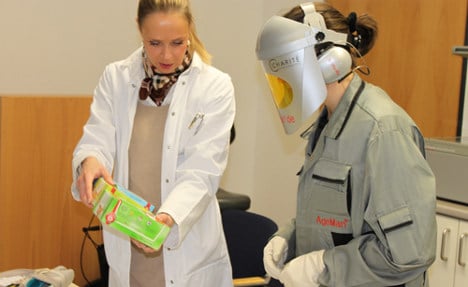 A fellow time-traveller in the suit. Photo: Evangelical Geriatrics Centre

When I catch my reflection in a mirror, I look not unlike an astronaut. A stiff, bulky bodysuit covers me from neck to ankle; thick white gloves protect my hands; my head is concealed beneath a sturdy silver helmet. A visor is secured over my eyes: everything is covered.

Under the suit I am also wearing a vest that is rigid and heavy like a Kevlar jacket, and straps that fasten tightly over my knees and ankles. As I extend one tightly swaddled leg in front of the other, I can’t help but imagine that I am beginning the solemn walk towards some distant launch-pad. But this is not space travel. This, in its own way, is time travel.

My futuristic ensemble was actually the Age Man Suit, a garment that simulates the physical effects of ageing. In a small room of Berlin’s Evangelical Geriatrics Centre, I experienced the real final frontier: old age.

“The suit mimics the feeling of being roughly 75 years old,” geriatrist Dr Rahel Eckardt said. At least, that’s what I think she said – the helmet contains ear-defenders that impaired my hearing.

A litany of new complaints

This was just one of a litany of other newly acquired complaints which included reduced vision courtesy of the yellow visor that replicated the effect of cataracts; diminished dexterity from the thick, cumbersome gloves; and, legacy of my weighted limbs and torso, a suddenly alien heaviness that I could only faintly compare to the sensation of taking to a pool fully-clothed for a swim test.

The unfamiliar disconnect between mind and body was particularly troubling; it was almost as if I had to consciously will parts of my body into motion. One small step for man was suddenly one giant feat of manoeuvre.

But it was not just my body which had to come to terms with the effects of the suit.

Eckardt guided me through a range of everyday tasks that would normally be accomplished without conscious effort – picking coins up off the floor, removing tablets from a blister pack, even telling two differently coloured shirts apart.

My feelings of frustration, helplessness and indignity built with surprising rapidity, as my usually sharp 21-year-old faculties were thwarted by creaking joints, fumbling fingers and treacherous eyesight.

For me the experience was extraordinary but for Eckardt transforming sprightly young people into slower, older ones is all in a day’s work. The Age Man Suit, she said, has been as much a part of her equipment as scrubs and a stethoscope since 2004. The question of why has approximately 16.8 million answers.

The future belongs to the old

That figure represents the number of Germans older than 65 – the United Nations says that at 20.6 percent of the population, only Monaco and Japan boast a greater proportion of pensionable citizens.

It may be counter-intuitive to imagine anyone but the younger generation at the forefront of societal changes – but in Germany the fastest-growing population group is the over-85s. Welcome to the developed world in the 21st century, where the future belongs to the old.

When Eckardt completed her medical studies at Berlin’s Free University in the mid-90s, geriatrics as a subject did not even exist. For the new generation of aspiring doctors, such a gap in the syllabus is unthinkable.

Already 14 percent of hospital patients are over 80, and this figure will rise to more than 20 percent by 2030 according to the Federal Statistics Office.

This represents a slow-motion epidemic which will challenge every aspect of medical care – yet because it is not dramatic or glamorous, it is not attracting new doctors.

The dreams of aspiring medics are simply not often filled with ideas of day-to-day management of long-term conditions like dementia and arthritis.

Few of the wide-eyed white-coated ingénues who come under Eckardt’s tutelage in the ninth semester of their studies at Berlin’s Charité teaching hospital will have considered a career in their mentor’s branch. But there is one trump card remaining to Eckardt and her colleagues – I was in it.

The Age Man Suit aims to harness the instinct that will have brought many medical students this far down their vocational path – empathy. The doctors of the future may not be able to walk a mile in the shoes of their prospective senior patients, but a short creaky walk across the floor and a slow, difficult encounter with stairs creates understanding.

Naturally the session with the Age Man Suit was not entirely serious in tone: in their prematurely superannuated guise, my fellow initiates attracted raucous laughter and cries of, “Over here, Grandpa!” from their assembled cohorts.

But it was interesting to note that most of the derision came from those who had not yet tried on the suit; the others were rather more pensive. One even said he found the experience “depressing”.

My ten minutes was soon up, and Eckardt zipped me out of the suit and removed my helmet to bring me back from the future.

The outfit was developed by Gundolf Meyer-Hentschel in the 1980s and is still manufactured by the company that bears his name. As well as its use in the training of medical students, the suit is also frequently employed by industrial designers seeking to better tailor their products to older clients, and has even been worn by actors in order to get into character for a play.

All would testify to the validity of Meyer-Hentschel’s original mission statement: “Things that people have not yet lived through can only be understood through personal experience.”