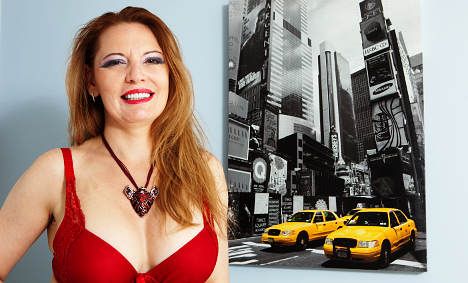 The mother of three, who is now in her forties, describes her life at the brothel Venusia in Geneva as “beautiful”.

“I am a whore. And proud of it. According to the Petit Robert Dictionary, I am also a pimp, because I draw earnings from the prostitution of others,” she says in the opening lines of her book.

Venusia is a 700-square metre brothel, kitted out with a large Jacuzzi, a cigar room and other themed rooms. Madame Lisa describes it as her life’s masterpiece, online news site Le Matin reports.

Although she is proud of her job, Madame Lisa said she would not be pleased if her 15-year-old daughter wanted to follow in her footsteps.

“I was careful in writing this book not to be apologetic for the profession. Because I do not want all the girls to apply for it. We earn a lot but it does not last,” she said.

To her surprise, not only was the sex quite tame, but she found an envelope in her bag with several thousand francs in it. It was then that she realised how she would make a comfortable life for herself.

After dedicating her working life to the sex trade, she said writing the book had now helped bring her closer to her parents.

“My parents realized I thrived in this profession but it hasn’t been easy. The book has been beneficial,” she said.