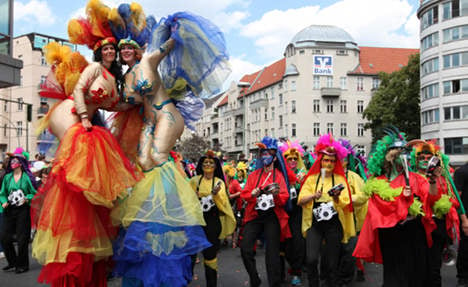 A frog king and a dancer in a white dress led what was more like a moving party than a parade as it danced and jiggled its way between the Neukölln and Kreuzberg neighbourhoods.

The parade was the high point of the four-day festival which dominates the south of the capital each Pentecost holiday, filling the streets with music, international food, drinks and lots and lots of dancing.

The festival’s artistic director Kathrin Hensse said that despite some complaints that the entire undertaking was becoming too commercial, money for the parade was tight.

Dance group Sapucaiu no Samba for example, could not find enough sponsors to cover the several thousand euros it needed for costumes so financed its costs from member contributions, fees for performances and prize money from last year, Hensse said.

The organizers are hoping that a group fund to support the parade can be established soon – something they’ve wanted for a long time.

“That would be important. After all we represent Berlin,” the 30-year-old told the newspaper, before a parade participant on stilts gave her a hug and pulled her away from the sidewalk and into the festivities.