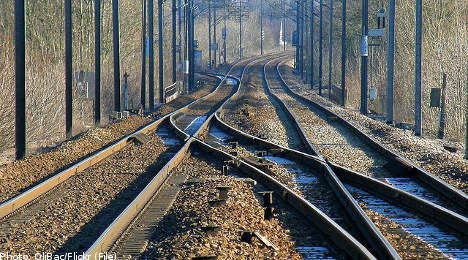 The boy, who is eleven years old, was found walking barefoot between Jönköping and Värnamo in central Sweden on Friday afternoon, according to Sveriges Radio (SR).

“Train drivers sounded the alarm on the line between Jönköping and Värnamo after seeing a boy walking in front of the train,” said Göran Gunnarsson of the Ekeryd police to SR.

Train travellers who wanted to get off the train to help the boy were prevented from doing so by train staff members, who explained that it was against regulations to open the train doors mid-route.

In addition, train staff were unable to get the 11-year-old’s attention.

One of the passengers was told that the train doors could not be opened while the train was in motion.

The boy allegedly threw stones at the moving train and occasionally became so tired that he sat on the tracks and rested while the train waited.

It was more than 50 minutes after the alarm was raised that the boy was safely taken off the tracks.

Police claim the rescue took so long due to the inaccessibility of the particular stretch of tracks where the boy was found, telling SR that no roads lead to anywhere near that stretch.

The boy had left an outing with his family and somehow found his way up onto the rails, according to SR.

Passengers complained that it was “terrible” that they weren’t allowed to help, yet the county transport authority Länstrafiken has stood by decision, claiming personnel on the train acted appropriately.

“It’s forbidden to let out travelers on the tracks due to the risk of accidents. Especially when the matter concerns a person who is disabled. Luckily, nothing happened,” said Carl-Johan Sjöberg of the regional train operator Länstrafiken to SR.

In celebration of the TGVs landmark birthday, Emmanuel Macron and Jean-Pierre Farandou – President of the SNCF, France’s national railway company – were on Friday at the Gare de Lyon in Paris to unveil the ‘TGV of the future’.

In front of a full-scale model of the new TGV M, Macron hailed a prime example of “French genius” and promised to unlock €6.5 billion to develop the TGV network, including new lines serving cities such as Nice and Toulouse. “We’re going to continue this grand adventure with new industrial commitments,” since more people are looking beyond metropoles to smaller cities – an apparent allusion to post-Covid prospects.

“We see clearly that life and work are going to be restructured, and that our fellow citizens today want to organise their time for living and time for working differently,” he said.

The streamlined version of the bullet train promises to carry more passengers – up to 740 passengers from 600 – while using 20 percent less electricity.

It will continue to whiz people between cities at a top speed of 320 km/h, making most door-to-door trips shorter and cheaper than on airplanes.

To celebrate the birthday of the TGV (which in French is pronounce tay-shay-vay) blowing out its 40 candles, here are a few fun facts about the super-speedy trains.

My French is only Tricolore-level at best, so not enough to be able to follow this, but SNCF's latest ad is achingly and effortlessly cool and very much deserves your attention👌🇫🇷 pic.twitter.com/6rhgRdGerj

Patrick  – That’s the name of the first TGV. Built in 1978 and set into action in 1981 on the Paris-Lyon line, the bright orange Patrick travelled some 13.5 million kilometres before taking his well-earned retirement last year.

0 – That’s how many passengers sit aboard the IRIS 320, which travels some 1,500 km every day. Laden with cameras and scanners, this 200-metre-long TGV rapidly inspects the state of the TGV’s train lines in order to ensure travellers’ safety and security.

€7 – That’s how much it costs to take a small pet – including a snail – on the TGV. Animals, even tiny ones, need their own tickets. In 2008 a TGV passenger fined for carrying live snails in his luggage without a ticket for his animals, although the fine was later waived after the story received national attention.

240 – That’s the number of stations served by the TGV network. 183 of these stations can be found in France. The others are located in Germany, Belgium, Spain, Italy, Luxembourg, Monaco, the Netherlands, Switzerland and the United Kingdom.

3 billion – That’s how many travellers the TGV had hoped to reach by the end of 2021. The pandemic may have derailed their plans slightly, but the service is still looking strong. The network served it’s 2 billionth passenger in 2012, just over 30 years after its launch.

1947 – the last year without a single recorded strike on the rail network in France. And that doesn’t necessarily mean that pre-1947 was a golden age of industrial relations – just that SNCF’s records are incomplete before then.