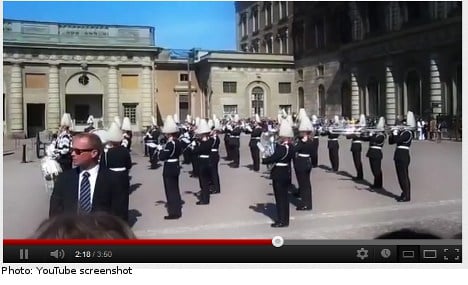 The Local: You played Euphoria back on the King’s birthday in April, did you guess that Loreen and Sweden would win?

Göran Mellblom: Yes, we did. The person who arranged the music for Loreen arranged it for military bands as well and we knew straight away that it was a winner.

TL: Why Euphoria? What made you pick that song?

GM: It is a great song for one, and we thought that since there are always many people coming to listen to the Royal Guards – especially tourists – that it seemed like a great opportunity to get it out there.

TL: Did you feel a bit like you were in on the victory on Saturday?

GM: Are you kidding? Of course we did! There was a Twitter storm after Loreen won the competition and the views of our YouTube clip skyrocketed as a result.

TL: How do you feel about that and what kind of response have you had since?

GM: We think it’s great! Back in the olden days, popular music used to be spread from the stages of the larger cities via the military bands throughout the country – that’s how it was made ‘popular’ in fact. This time it sort of happened again – and people love it!

TL: Will Euphoria become part of your ordinary repertoire?

GM: It already is! Every time the Royal Swedish Army Band performs, Euphoria will be played!

The next opportunity to see the Royal Swedish Army Band perform Sweden’s winning entry to the Eurovision 2012 will be at the Royal Palace in Stockholm on June 1st and 2nd at 12.15pm.