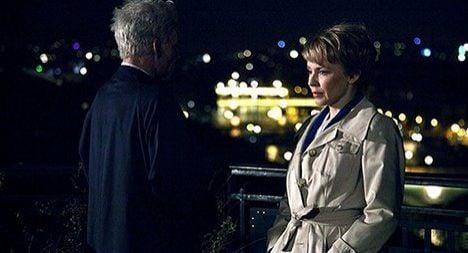 “Who is the public? All I know is it’s a bunch of people who will be dead very soon,” the director replied when asked for some clues to understanding his film “Holy Motors,” one of 22 racing for the festival’s Palme d’Or top prize.

Dubbed both “heartbreaking” and “completely bonkers” by reviewers at the Riviera festival, Carax’s experimental parable on life’s futility, co-starring Kylie Minogue and Eva Mendes, has shot to the front of the Cannes race.

Starring French actor Denis Lavant in no fewer than 11 roles, the visually powerful film tells of a man who slips actor-like between shifting identities, in a succession of tableaux alternately wacky, serious and moving.

It notably features a flame-haired troll carting off a fashion model played by Mendes to his underground den, a duo in motion-capture suits miming a sex scene, and an intermission by a band of jamming accordionists.

Asked for the meaning of the troll sequence – which sees the grunting, goateed imp clothe Mendes in a makeshift burqa before lying, aroused and naked, on her lap – Carax replied: “How would I know?”

In the notes to the film, Carax said the troll – dubbed “Mr Merde” (Mr Shit) – was an archetype intended to embody “fear and phobia” and a regressive spirit that he saw taking root after the September 11 attacks in 2001.

Questioned again about his relationship with the audience, the shade-wearing director said: “I care about being seen. As to being understood, well. Loved? Yes, if there is one person who loves me I will be happy.”

The 2018 Palme d'Or winner Japanese director Hirokazu Kore-Eda posing for the cameras at the Cannes Film Festival, is an annual highlight for movie lovers in France. Photo: AFP

“As announced last autumn, the Festival de Cannes reserved the right to change its dates depending on how the global health situation developed,” they said in a statement.

“Initially scheduled from 11th to 22nd May 2021, the Festival will therefore now take place from Tuesday 6th to Saturday 17th July 2021.”

The festival was cancelled last year, while rival European events in Berlin and Venice went ahead under strict health restrictions.

The Berlin Film Festival, which usually kicks off in February, said last month it would run this year's edition in two stages, an online offering for industry professionals in March and a public event in June.

France has closed all cinemas, theatres and show rooms alongside cafés, bars and restaurants as part of its Covid-19 health measures and the government has pushed back their reopening date until further notice due to rising levels of viral spread across the country.

The Cannes festival normally attracts some 45,000 people with official accreditations, of whom around 4,500 are journalists.

It had only been cancelled once before, due to the outbreak of war in 1939.

Its Film Market, held alongside the main competition, is the industry's biggest marketplace for producers, distributors, buyers and programmers.

Last year, the festival still made an official selection of 56 films – including the latest offerings from Wes Anderson, Francois Ozon and Steve McQueen – allowing them to use the “Cannes official selection” label.