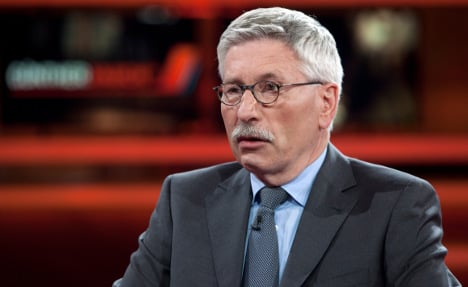 Sarrazin appeared on a state TV talk show on Sunday evening to defend his thesis against former Finance Minister Peer Steinbrück, who overcame his usual reserve and described Sarrazin’s ideas as “bullshit.”

In his new book “Europe Doesn’t Need the Euro” Sarrazin says Germany’s efforts to rescue the euro were “driven by the very German reflex that the Holocaust and World War II will only be finally atoned for when all our other interests, including our money, is in Europe’s hands.”

Both Steinbrück and Sarrazin are members of the centre-left Social Democratic Party (SPD) and both have experience of administering state finances – Steinbrück was German finance minister under Chancellor Angela Merkel from 2005 to 2009, while Sarrazin was finance minister for the state of Berlin from 2002 to 2009, before joining the board of Germany’s central bank, the Bundesbank.

He was forced to leave this last post in 2010, after publishing the provocative book “Germany Does Away With Itself”, in which he blamed Germany’s immigrant community for the country’s economic and social problems.

Sarrazin describes his new book as an answer to Merkel’s statement, “If the euro fails, then Europe fails,” and said Germany’s export-driven economy did not need the euro.

Steinbrück accused Sarrazin of overlooking the many advantages the euro has brought Germany, and said the single currency had been a “pillar of European integration.” He also dismissed Sarrazin’s Holocaust remark as “historical amnesia” and his new book as a “banal economic analysis” that forgets the fact that the Europe’s financial woes are down to a banking crisis as much as a debt crisis.

Much of the TV debate was taken up with Sarrazin rattling off statistics, a tactic that exasperated Steinbrück, who exclaimed, “Sarrazin can make up all the bullshit he likes,” he said, before rounding on moderator Günther Jauch, “You should assert yourself a bit more here!”

The recording was accompanied by a handful of protesters outside the studio, who held up slogans saying, “No room for racism!”

Incumbent Finance Minister Wolfgang Schäuble was unfazed by Sarrazin’s critique of his European policy. “Either Sarrazin says and writes his appalling nonsense out of actual conviction, or he does it out of obnoxious calculation,” he told the Bild am Sonntag newspaper on Sunday.

“We can be happy that we have been given a second chance despite the Holocaust … and that there is a growing Jewish life in Germany,” he said.

Schäuble also attacked Sarrazin’s methods in general as simplistic and populist. “That was the case with the way he handled the not-so simple problem of integration in our country,” he added. “He obviously wants to repeat that commercial success with the euro issue. As long as he pays his taxes properly, that’s fine by me.”