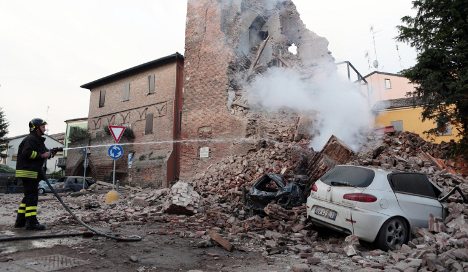 The 37-year-old woman was in the Bologna region for work when the earthquake struck, strongly enough to be felt throughout northern Italy, and sending people in towns and cities including Milan onto the streets in fear.

Three night-shift workers were killed when a ceramics factory in Sant‘Agostino near Ferrara collapsed, while another man was found dead in the wreckage of an industrial building about 15 kilometres away.

Houses and churches collapsed into piles of rubble, with a five-year-old girl pulled alive from the wreckage of her home in Finale Emilia.

Italian news agency Ansa said that the German woman started having breathing problems shortly after the initial quake, and that it is thought a panic attack led to her death.

A man called the emergency services but they could not help her and she died.

An Italian woman who was more than 100 years old also died – it is thought of shock.

The quake measured 5.9 – nearly as strong as the Aquila quake from 2009 which caused huge damage in the region. Several hefty aftershocks were also felt during the couple of hours after the 4am initial quake.