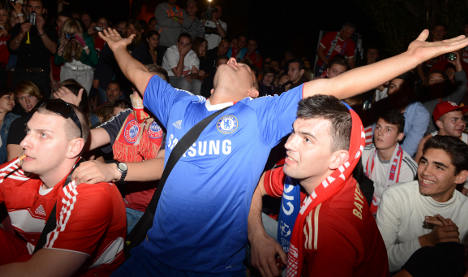 More than 100,000 football fans had filled the city throughout Saturday, with enormous public viewing facilities at the Olympic Stadium and the Theresienwiese site of the Oktoberfest booked out.

“The city was rammed,” one policeman said on Saturday evening.

But after spending much of the match confident of victory – it would have been the first European Cup won on home turf since Inter Milan did it in 1965 – Bayern fans were left disconsolate by the final result.

Rather than tens of thousands of Bayern Munich fans parading in red and white through the city, the streets were left to the 20,000 or so Chelsea fans who were obviously delighted.

And although the disappointment was enormous for Bayern fans – summed up by big-screen images of Bastian Schweinsteiger devastated by his missed penalty – there was little reported trouble on the streets.

By midnight Munich police were happy enough with fans’ behaviour. A spokesman said there had been the usual small incidents, a few chairs kicked over, a bit of vandalism and people travelling on public transport without tickets. “For the number of people it went relatively quietly,” said the spokesman. “They were drinking all day.”

Chelsea fans who filled the streets once the miserable Munich fans had gone home, were also relatively well behaved, the spokesman said.

Bayern’s long domination of German football would now seem to be over – the team lost the Bundesliga and German cup titles to Borussia Dortmund, and Saturday night’s loss makes this year the first since 1995/6 that Bayern has failed to win any titles in back-to-back seasons.

The Bayern Munich team now has to pull itself together for a friendly match against World Cup finalists Holland – in Munich, on Tuesday.