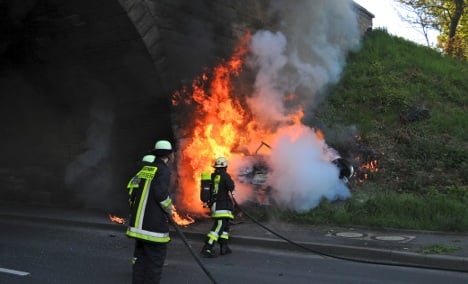 The car, a Honda Civic, hit the pillar of a bridge head-on near Petersberg in Hesse, a police spokesman said – and turned into a fireball, with four passengers inside.

The only survivor was a 14-year-old boy who some reports say was dragged from the burning wreckage by passersby, or cut free by rescue crews. He was taken to hospital suffering serious injuries.

The fire was so fierce that emergency workers could not tell how many people were trapped inside.

When it later emerged that three people had died inside, those who had tried to rescue them were offered emergency pastoral support, the police spokesman added.

The cause of the crash remains unclear. The wrecked vehicle was recovered, with the bodies still inside, and taken to a secure compound. “All further investigation must be conducted in painstaking detail,” said the spokesman. An expert witness has also been appointed, who will be tasked with carrying out a reconstruction of the accident.

Those who died have not yet been formally identified, but early indications suggest that they were a family from the Fulda area.