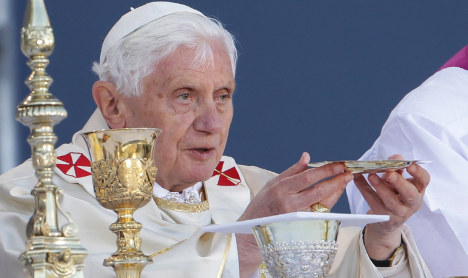 It is 95 square metres, has four rooms, and a balcony, the new-build flat on the outskirts of Bonn is up for rent at the going rate for the area. At first glance, it is a rather ordinary apartment, reported Der Spiegel magazine on Friday.

So when landlady Zofia Ahren placed an advert on various internet portals offering her flat up for rent, she made the most of the building’s unique selling point – its consecrated former inhabitant.

A plaque in the entrance says the Holy Father rented an apartment in the block for four years between June 1959 and May 1963 while working at the University of Bonn.

Whilst it’s documented that Pope Benedict did live in the building, Zofia admitted she isn’t entirely sure which of eight flats in the block had been home to the current pontiff.

“Whether it was this flat or one of the others, no-one knows anymore,” she told a reporter from Der Spiegel who visited the flat on Friday. “I‘ve no idea whether he stood here once or not,” she added.

Since the story was picked up by the Bonn edition of the tabloid Express newspaper last Monday, Zofia has been inundated with calls and visits from journalists – but few serious potential tenants, she told Der Spiegel.