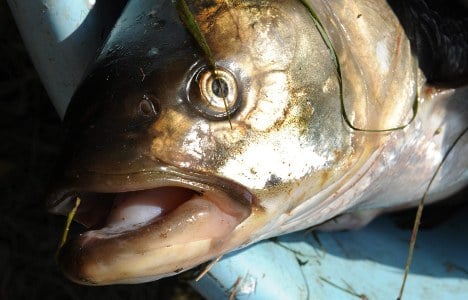 Around 500 dead fish have been found in the picturesque Eichbaum lake near the northern port city, which attracts bathers in the summery weather. But now it seems those pleasure-seekers have blood on their hands.

“Swimmers who urinate in the lake are introducing a lot of phosphate,” Manfred Siedler, spokesman for the Hamburger Angling Association (ASV), told Bild newspaper. “We’re calculating half a litre of urine per swimmer per day.”

Phosphate contributes to a build-up of blue-green algae in the water, playing havoc with the lake’s eco-system and apparently poisoning the fish. According to Bild, authorities have already tipped some 148 tonnes of anti-phosphate agent Bentophos into the water, at a cost of €516,000, but to little effect.

The Local understands that there has also been a longstanding feud between the anglers and the bathers over the lake.

Bathers are currently banned from the lake due to the high levels of algae, but the city’s Urban Development and Environment Authority (BSU) is working to fight it and re-open the lake.

The BSU believes that the fish deaths are not particularly unusual, and have been caused by a combination of natural causes and ice-skaters, rather than pee.

“The ice-skaters make a noise that wakes the fish out of hibernation,” BSU spokeswoman Kerstin Graupner told the Local.

“Then they can’t breathe and freeze. That’s a very common phenomenon.”

She underlined that though the fish have only been found in the past two weeks, they must have been dead for some time, judging by the decomposition.

BSU has since called in Hamburg University to test the pee-death theory, and says that apart from the high level of algae, the water is clean. “It is very rich in fish,” Graupner added.

But according to Bild, the first water tests are not encouraging – with a pH level of 8.7 (as opposed to the neutral 7), the lake is very alkaline.

Scientists have reportedly also found anabaena algae blooms, unusual at this time of year, which produce anatoxin-a. This causes the lake’s ammonium to change into the poisonous ammonia, which restricts the fish’s breathing.